Does cheap gasoline cause crime?

I wish gas were taxed more. Much more. Luckily, I'm not running for political office. I saw this figure in an article in today's New York Times. 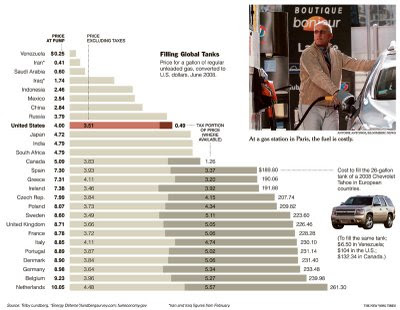 The point of the article is that gas in the U.S. is still pretty cheap compared to most countries. But when I look at the figure, I see what I think is an inverse correlation between the price of gas and crime. Leaving aside middle-eastern countries that produce oil, countries with cheap gas have higher crime rates and countries with expensive gas have less crime. I haven't actually looked at the crime rates for these countries (and if somebody has the time and desire, please do and let me know), because I don't think this correlation has any real meaning. But it's interesting.

While I'm pretty sure that higher gas taxes won't cut the homicide rate, there does seem to be a pretty strong correlation between expensive gas and safe streets. I'm writing this from Amsterdam, the Netherlands. Gas here tops the chart at $10 a gallon. Yet the economy seems to be doing just fine and too many people still drive to work in SUVs.

What does the government do with all this tax money? Along with more police and safe streets, there's also health care, job security, paid vacations, public transportation, bike paths, and a secure system of dikes and levies that actually keeps the country from being flooded. Not bad for a few bucks a gallon.

Email ThisBlogThis!Share to TwitterShare to FacebookShare to Pinterest
Labels: causes of crime

-Garbled Quotation of a Guest on Conan...a year ago?