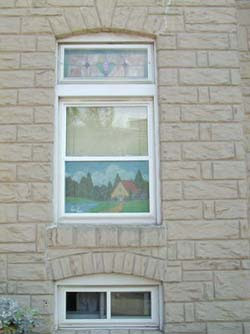 I love whatever makes a city unique. In Baltimore, that includes painted screen, marble stoops, and Formstone When I arrived in Baltimore, I said, "what is this stuff?" Well. It's Formstone. Turns out there's Formstone (or cheap imitations) in Queens and Brooklyn, too. But there's a lot of Formstone in Baltimore.

Baltimore brick is a very pretty red but isn't very strong (poor Baltimore). So people hammer it out to break into buildings. And it's porous. So people paint it. Along came Formstone. Put it on and it's maintenance free. Think of aluminum siding, but cooler. And there's actual hand-made artistry in Formstone.

I got good, as a drove around East Baltimore on slow nights, of picking out Formstone from Formstone imitators. Accept no substitutes, I say.

I just watched this great half-hour documentary, "Little Castles: A Formstone Phenomenon." Anybody interested in Baltimore of Formstone or Baltimore accents should buy it. And yes, of course John Waters is in it!

The only place selling is selling it as non-copyrighted material. That means no money is going to the film makers, Lillian Bowers and Skizz Cyzyk. But maybe if there's more demand, Formstone Films will start selling it.

I learned from it. And I already knew more about Formstone than most young Baltimoreans and 99.99% of the world. You get to see Formstone going up, and coming off.

I was told that Formstone was hand formed. I didn't believe it. I thought it was a mold. But it is made by hand. I was also told it was real stone. But it isn't. It's concrete.

Here's a little trailer I made of the documentary. If you like it, try and support Formstone Films, though it's not exactly clear how you can do that. I hope the makers don't mind me posting this without permission. But this documentary deserves publicity.

I also lived in "Hollandtown." That's Highlandtown, by the way, with a Baltimore accent.

Also, when you watch it, ask yourself what year you think this was filmed. It's far more recent than you think. That's the beauty of working-class Baltimore. It's like a time warp. It's still like this!

The older women in the film make me think of my wonderful landlady, Miss Mary. Too bad our house had vinyl siding and not Formstone.

Also, as a cop I tried hard to pry one of the "Genuine Formstone" plaques off a vacant as a souvenir. I couldn't. Those things were built to last.

I want to finish my basement in Formstone. Too bad they don't make it anymore.