There's another profile of me, this time in the Financial Times of London. 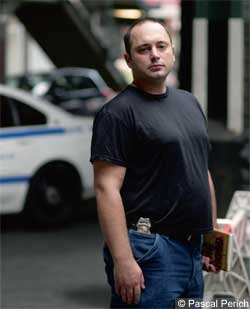 It's funny to read an "as told to" when I know I didn't say things quite like that. I can't imagine I said I thought long and hard about joining, because I didn't. I thought it was a great opportunity and I didn’t have a choice, really. But who knows what I say? Sometime my mouth moves faster than my brain. While I may have said The Wire is a good show because "it doesn’t portray cops as always being good." What I meant is the that The Wire is good show "because it doesn't show cops and being always bad." But I'm not complaining. This is great publicity. And the feel of the interview is correct. But let it be known I have never in my life said "learnt."

I do like the picture. It's the "classic police shot." The photographer, Pascal Perich, called me and I recommended going to the Ditmars elevated subway stop here is Astoria. That's where where a good scene in the old movie Serpico was filmed. They didn't choose the shot from the alley of the shoot out, but this is from under the tracks. The photographer strongly requested I bring my old badge (it wasn't my idea), my book, and "look intimidating."

Email ThisBlogThis!Share to TwitterShare to FacebookShare to Pinterest
Labels: cop in the hood, good press

Congrats. I did find you to be very intimidating. Heh Heh.

Hey, I found your book thru the FT. My husband subscribes and we were actually giggling thru the Arts section (I got cross-eyed midway thru the "analysis" of Paul Auster)...reading about your book was a nice break from the pomposity. I went to the Coop over the weekend to pick up your book, so the FT article yielded at least one reader for you :)