More on NYPD vs. bicyclists

If you need more proof that something ain't right in how the NYPD handles Manhattan's Critical Mass bike ride, you should watch this video on the blog, The Agitator. There's an anti-police tone I don't like. And overproduction. And half-assed legal knowledge (there is no Constitutional right you "wave" when you identify yourself to police. Ask Dudley Hiibel. And if you really are concerned about bargaining away Constitutional rights, why not focus on our horrible system of legal plea bargains?)

Anyway... the juxtaposition of quotes from charging documents and video proof to the contrary is pretty bad.

In George Kelling and James Q. Wilson's classic "Broken Windows" piece, they talk about police being told to clean up a park because bums are harassing secretaries. So cops go in and bust heads and then, when the somebody like the ACLU inevitably complains, the brass throw those cops under the bus because they're shocked. Shocked(!) that police officers would behave that way. Besides, they say, they never gave orders to bust heads.

One of the great successes in applying Broken Windows in NYC was that the chiefs did everything legally and openly. Not always popularly. But they did get the bums out of the subway. And they did so legally.

Why is that important? Because if you put police in an impossible situation and don't tell them what to do, you shouldn't be surprised when cops start being stupid.

I didn't relish being filmed as police officer because things can be taken out of context and used against you. But filming police actions is legal and, especially if you're in the middle of Times Square, get used to it!

Police departments willing to open themselves to public scrutiny are a good litmus test for a free society (that's not my idea... but I can't remember whose line it is). Generally, police in the U.S. do OK on that front. You want to go on a ride-along at your local police station? Odds are you can do it. That's a good sign. Saying "no cameras" is a characteristic of repressive regimes. It's not a good sign.

I feel sorry for police officers placed in situations where they are duty bound to fail. But if you are a police officer placed in such a situation, remember that you don't have to join the mob. Nobody can force you to do anything illegal and nobody can force you to lie on a Statement of Probable Cause and sign your name to it. And if you do lie and get caught, you can be damn sure that whoever "made you" do it won't be protecting your ass!

So what if I were ordered to police Critical Mass and told to arrest anybody I legally could? Well, for starters I wouldn't walk too fast. And come to think of it, I think an important part of policing such a "dangerous" event is making sure tourists, especially the good looking female kind, are safe from danger. I would protect as many as possible.

If I felt I actually had to work because my sergeant was breathing down my neck? I would only arrest somebody doing something worse than just biking down the street. Open container? Scaring pedestrians? Yelling "fuck you" to police without ID? I might even grab somebody off their bike if they wouldn't stop (I'd look for a pale and thin looking hipster). I wouldn't knock anybody off.

Finally, no matter what happened, I wouldn't lie in my charging documents. As I write in my book, I may have violated the spirit of some laws (like loitering), but I never violated the letter of the law. Why risk your career to stop a person riding a bike through Times Square? It's not worth it! 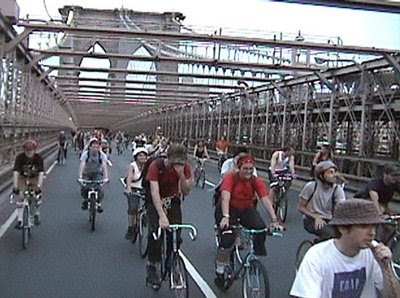 Excellent analysis. When the poitical establishment gets huffy and says they are going to "do something" about crime and disorder, front-line police (and ghetto residents) better watch out. It will be similar to Abu Ghraib. The command staff, the city council and others will rush to condemn you for your actions, even if they promoted "get tough" tactics. So why bother?

When it comes to things like CM, just make sure people aren't blocking traffic for too long or trying to intimidate motorists (the mortal enemy of some CM riders). Arrest only for obvious violations. As for Lin and some of the other CM people, they got precisely what they wanted and NYPD was stupid enough to play along. I don't condone the behavior of the officers, but I do get the impression that many CM folks want to be martyrs and will jump at the chance to get beat on by the mean old POlice. That's the "anarchist" left for you. They want government to get out of the law enforcement/national defense business and just act like a big ATM for the "workers."

I don't think Lin wanted to get arrested. I guess she was thinking, "I'll do nothing wrong. I won't say a thing. I'll just take a picture and walk away."

But maybe she did do something to give the police reasonable suspicion to stop her. In which case she wasn't free to walk away. Who knows? But come on sister, stop the screaming!

In truth, in that video, along with the lies and harassment of bicyclists and people with cameras, I also see a lot of police handling a tough situation professionally.

"Why is that important? Because if you put police in an impossible situation and don't tell them what to do, you shouldn't be surprised when cops start being stupid." AMEN! In the absence of guidance and good supervision cops will do what seems like a good idea. What seems like a good idea when you're surrounded by a lot of Type A, like-minded peers doesn't always translate into a good idea when reviewed in a courtroom. Besides, it's better to be disciplined for "doing nothing" than to make a YouTube spectacle of yourself.