The great rule of conduct for us in regard to foreign nations is, in extending our commercial relations to have with them as little political connection as possible. So far as we have already formed engagements let them be fulfilled with perfect good faith. Here let us stop.

The U.S. messing up other countries to fight our failed war on drugs is nothing new. Here's the latest, in an article in the New York Times about the U.S. meddling unproductively in Boliva. 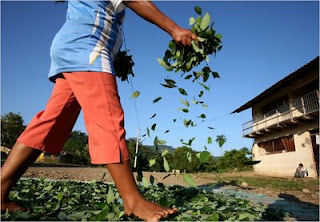 "Two months ago a mob of 20,000 protesters marched to the gates of the American Embassy, clashing with the police and threatening to burn the building down." The president praised the demonstrators.

"[President] Morales, a former grower of coca, the raw ingredient of cocaine, is both an antagonist and an active partner in American antidrug policy for the region. He often describes the United States as his leading adversary and has made the right to grow the coca leaf a top symbol of sovereignty and anti-imperialism.

"Yet he has also gone to unexpected lengths to restrain coca cultivation, and he accepts about $30 million a year from the United States — almost his entire antinarcotics budget — to fight cocaine."

"For now, Mr. Morales and the United States remain uneasy bedfellows. Mr. Morales has been hesitant to sever ties with the United States, especially since it provides Bolivia with about $100 million in development aid each year. It also grants duty-free access for Bolivian textiles, an economic lifeline for his country."

"The American-backed Anti-Narcotics Special Forces, known as the Leopards, go about their job. Each day at dawn, eight-man teams in camouflage snake out of a military base here in new Nissan Patrol sport utility vehicles, driving down dirt roads into the jungle. Then they get out and walk, chopping through brush with machetes, grasping M-16 rifles, in search of small mobile coca-mashing factories that have pushed Bolivian cocaine production to a 10-year high. When they find one, they set it ablaze."

The commander of the unit says, "We depend on the Americans for everything: our bonuses, our training, our vehicles, even our boots."

"Mr. Morales, 48, spent his teenage years in the coca fields of the Chapare after his impoverished family migrated here from the high plains. He then rose through the ranks of the region’s coca growers unions in the 1980s and 1990s, a time when American-backed troops were aggressively trying to eradicate every illegal coca plant in Bolivia."

"In defiance, coca growers, or cocaleros, blockaded crucial roads and clashed with security forces. In a new biography of the president, the Argentine writer Martín Sivak describes one episode in which a group of Leopards beat Mr. Morales after he spoke at a rally, leaving him for dead. A photograph in the book shows the president as a wisp of a young man, lying beaten on a stretcher."