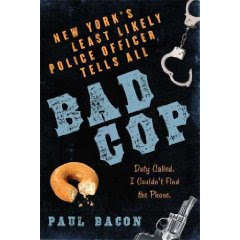 Paul Bacon's Bad Cop: New York's Least Likely Police Officer Tells All is a good book. It's a quick read and a nice look inside the NYPD.

My problem is that the hits a little too close to home. Bacon is a self-professed liberal who only stayed in the police department a few years. Errrrr... Sounds like me. But I quit because I wanted something better. Bacon quit because he couldn't hack it. Bacon was, as he readily admits, a bad police officer. And by the end of the book, I was convinced.

That doesn't sound like me. At least I hope not. Even worse, Bacon seems to blame his lack of policing ability on being a (gasp!) Liberal. I couldn't disagree more. I'm generally of the belief that a lot of people could make good police officers. Paul Bacon does not help me make this case.

Bacon's problems didn't come from his political beliefs, it is the fact that deep down he's a slacker. A beach bum. His general mellowness and belief that everybody can just get along if just left alone is not liberal. It's lazy. It turns out Bacon is a good at hanging out on the beach and being a dive-instructor. Perhaps it is those very qualities that made him a bad cop.

All that said, I really liked the book. It's a great read, if a bit "lite" (but a hell of lot deeper than most other lite cop reads). Bacon (and yeah, he already knows that's a funny name for a cop) has a wonderful perspective on the daily life of police officers and some of the absurdities of policing in the NYPD. Plus it's only $10 on Amazon. How can you go wrong?

I'm generally of the belief that a lot of people could make good police officers.

I disagree. It's a calling, not a job. If you last only a few years on the force, it's not in your blood. That's what would happen with "a lot of people." They'd stay a few years then get out because they can't take the 24/7 aspect of the life. Sheep do not make good sheepdogs.

You change from within if you see problems. You don't quit after a few years and write books. Arguably that makes the system worse, not better.

To me, the difference between me and Paul Bacon is that I could hack it. But it wasn't my plan to stay 20 years. So I did quit after 2 years and did write a book. But I really hope to make the system better, not worse.

I also think that for a majority of law enforcement officers, policing is a job and not a calling. I will grant that the best police of the job think of policing as a calling... but then so do the very worst police officers, the most dirty and the most corrupt.

Too many people go into the job thinking they can change the world and clean up the streets. They don't. They get disillusioned and crash and burn. To survive 20 years policing, you need to pace yourself.

On an unrelated note, given that "sheep do not make good sheepdogs," why then do police departments train rookies in the academy to be like sheep?

Thanks for the review, Peter. I'll make time to read it.

Your sheep comment suggests to me you're not familiar with Dave Grossman's writing.

Two years on the force before quitting doesn't give someone much of a perspective. A lot of rookies can't hack it and bail after a year or two. I would hardly call them experts on policing.

It's been years since I've read Grossman's On Killing, but it had an impact on me. I should re-read it to see if the parts I remember do justice to the whole book.