It surprises a lot of people to find out that fewer and fewer police officers are killed on duty than in the past. I guess it counters the natural inclination to assume that the world is going to hell and violence is out of control and kids these days... have you seen what they're wearing? 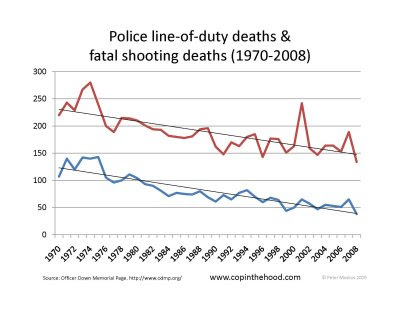 The top red line is total police line-of-duty deaths. The bottom blue line represents cops shot and murdered on duty. I compiled these data for class. It's much harder to get data on police-involved shootings.

After being shot, car crashes comes in a close second. Nothing else comes close.

Why are fewer police officers killed? Probably a combination (in no particular order) of better training, better emergency medical care, better equipment, and more restrictive shooting policies. Still, on average, a police officer is shot and killed almost every week in America.

It's interesting that shooting deaths don't seem to correlate with overall trends in homicide. Because in general the best predictor of police and police-involved shootings is a high level of violence in the community.

All the data comes from the Officer Down Memorial Page.

"Because in general the best predictor of police and police-involved shootings is a high level of violence in the community."

Peter, do you have any data on the prevalence of police-involved shootings in Canada or Western Europe? Even though policing, statistically speaking, is not as dangerous as some other occupations in the U.S., my guess is that police in America are much, much more likely to face physical attacks than their counterparts in other liberal democracies.

Since handguns are not as common in Western Europe, perhaps I should have asked not just about police-involved shootings, but other violent attacks on officers.