Here's a dumb recipe for a photo-op: take one 747, fly it low around Manhattan, circle around a bit, and follow it with two F-16 fighters.

Who was the idiot that thought of this brilliant idea? This is pretty inexcusable. And it sure better not turn up in an "Obama 2012" campaign ad.

The Police Department acknowledged that it had been notified about the event but said it had been barred from alerting the public. “The flight of a VC-25 aircraft and F-16 fighters this morning was authorized by the F.A.A. for the vicinity of the Statue of Liberty with directives to local authorities not to disclose information about it but to direct any inquiries to the F.A.A. Air Traffic Security Coordinator,” the Police Department said in a statement.
...
“New York City police were standing right there and they had no knowledge of it. The evacuations were spontaneous. Guys from the floor came out, and one guy I talked to was just shaking.”

The story in the Times.

At least the presidential campaign is over so we don't have politicians running around New York City to wrap themselves in the American flag at Ground Zero before leaving town to bash the entire city as un-American.

Does the rest of the country really see New York City as just a patriotic prop or a filthy den of unpatriotic immigrants, liberals, and Jews? Really, now... we're good people. And we live here. Please stop pissing on us.

I thought it was just Baltimore where I needed this sign: 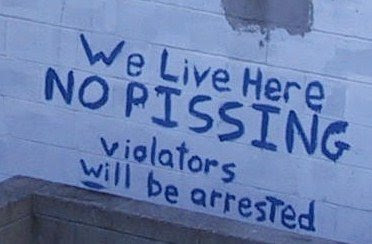 Email ThisBlogThis!Share to TwitterShare to FacebookShare to Pinterest
Labels: terrorism

Anything for a good photo- eh Bush...I mean Obama?