This Stephen Morgan is not a murderer! 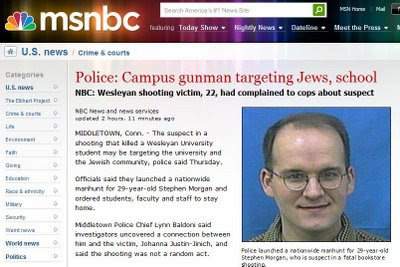 This mild-mannered Stephen Morgan lives a quiet professorial life in Ithaca with his wife and kids (at least that is what he tells me). This Stephen Morgan is a grad-school friend of mine and was nice enough to invite me to speak at Cornell University last month. Some of his best friends are Jews. And I saw no homicidal tendencies. And that's even after a long winter in Ithaca.

Last night I read that a Stephen Morgan killed a Wesleyan University student. I sent my friend, Stephen Morgan, the story. He writes back with a story that feature his (my friend's) picture. Then today I get this: "It's worse: CNN broadcast the photo on air! The producer just called to say they will run a correction soon." I should hope so!

This is the killer: 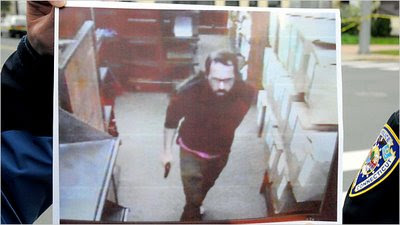 This is not the killer: 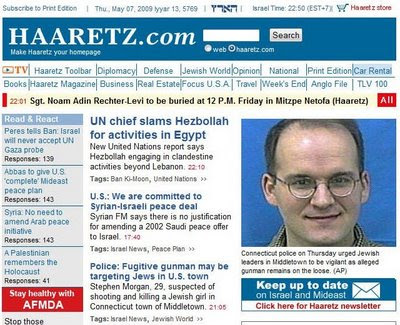 This Stephen Morgan is a killer. 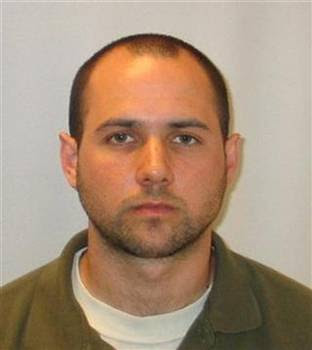 Please note that both have similarly receding hairlines, but the resemblances really ends there.

If you run into a Stephen Morgan and you're not sure which one you're dealing with, try showing him this:

This innocent Stephen Morgan will immediately start rambling on about advanced statistics. If you say "poissant regression" to the guilty Stephen Morgan, he might start talking about fish.

Actually, what's scary to me is that the guilty Stephen Morgan looks a lot like me when I was his age (29):

I am not a killer, either!

This is what happens when you staff your stringer pool with interns.

I have a similar problem. My name is identical to a far more recognized researcher who, like me, is a cultural critic and ethnographer. At some point I will be submitting to journals that he has appeared in -- I have yet to decide how I will handle this.

Your regression based identification strategy caused me to spit-take my coffee.