A Radical Solution to End the Drug War: Legalize Everything

Esquire.com just published a nice piece by John Richardson about my op-ed co-author, Neill Franklin, on violence in the drug war.

We've heard a lot about the terrible death toll Mexico has suffered during the drug war — over 11,000 souls so far. This helps to account for the startling lack of controversy that greeted last week's news that Mexico had suddenly decriminalized drugs — not just marijuana but also cocaine, LSD, and heroin. In place of the outrage and threats that U.S. officials expressed when Mexico tried to decriminalize in 2006 was a mild statement, from our new drug czar, that we are going to take a "wait and see" approach.

Still, we've heard nothing about the American death toll. Isn't that strange? So far as I can tell, nobody has even tried to come up with a number.

Until now. I've done some rough math, and this is what I found:

To repeat, that's 6,487 dead Americans. Throw in overdoses and the cost of this country's paralyzing drug laws is closer to 15,000 lives. 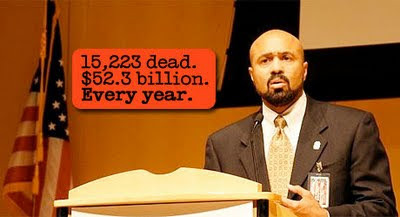 Email ThisBlogThis!Share to TwitterShare to FacebookShare to Pinterest
Labels: LEAP, war on drugs