Not a good way to go

Just doing your job. Delivering bread in the hood. Driving in your bakery truck. Minding your own business.

Next thing you know. You're dead. Shot. Just like the bad old days.

Seems like some idiots were playing with guns on the roof of the Marlboro Projects. Probably just shooting for kicks. Who would think that one of these idiots would have good aim? That a bullet fired from a gun might hit and kill someone?

Ecuadorian immigrant Jorge Martinez lived not far from me, in Elmhurst. By all newspaper accounts he seems like a good man. Here's a picture of him and his son from the Post. 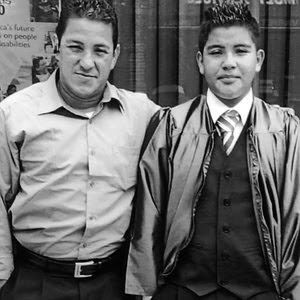 In the same article a woman is quoted as saying:

A couple of months ago, a bullet hit my window.... When I hear shots I tell my kids to get away from the window. I feel bad for the guy, but this is what goes on here.

What are the chances that this knucklehead with the gun walked right by a cop who was too afraid to stop and talk to or frisk him because of the political anti-cop climate in NY (especially Bk.)? That is a story you would never hear about in the agenda driven NY media.
Ed

Unlikely, considering the NYPD has not not backed down one iota from their "stop and frisk" policies.

Unlikely indeed. But let's not forget the uproar when the cop accidentally shot and killed Timothy Stansbury Jr. on a roof in 2004.

Many people asked why cops had to do verticals at all. Were vertical patrols de-emphasized after that? I don't know.