Does anybody believe this is a good idea for subway patrol? 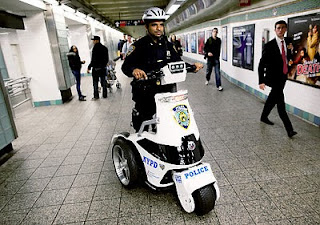 Granted with only 13 the NYPD isn't making a major investment, but it's still a big waste.

"Their biggest benefit is increased police visibility, as they put an officer heads and shoulders above the crowds, police said" in the Daily News. What? Actually, no. It puts police about six inches above their normal height. And if that were so important, hire taller cops. Or stand on a phone book. Or how about putting police in top hats? (personally, I would love to have an official NYPD top hat.)

The downsides of these overpriced toys are almost so obvious I feel dumb for even having to point them out--along with cops in bike helmets looking incredible dorky--what about stairs? What about turnstiles? What if the elevator to the street breaks? And God forbid an overweight cop is seen on one of these. I mean, really, cops are supposed to ride up and down one subway platform?

Once again, I'd like to point out there's nothing wrong with walking!

Also, how about when its rush hour and the stations are completely packed with people?

The city should also be prepared to settle the million dollar lawsuit that will inevitably come after a cop accidentally runs into someone with this device.

In addition, it seems kind of dangerous to ride a motorized vehicle on a subway platform.

Oh, they will get nothing but respect on those.
It reminds me of one of my first encounters with B'more police. Walking on North Avenue my wife and I caught ourselves in jay walking in front of a police car. We looked over and the cop in the passenger seat was grabbing the loud hailer. Having just moved from LA, we were prepared for a stern lecture. Instead he starts singing

We looked across the North (5 lanes and a wide medium for those not familiar with Baltimore) and scooting along the sidewalk is cop on a Segway, safely topped by a bike helmet. He would have looked ridiculous even if he wasn't being mocked by his fellow officers. At that point we knew we were in a very different city than LA (ok, there might have been a few points before that).

East or West side? Just curious. There were no segways when I was there, but I can imagine any cop in the Eastern doing that (Though I'm sure the Western is no different).

"Baltimore, the LA of the East." -- Maybe they can paint that on the benches, next.

It was right at the edge of the Western.
St. Paul or Charles Street...so the calmer part of North.

I'm not sure what I think of "Baltimore, the LA of the East", I do have a strange defensive affection for both. Its better than the "Baltimore, America's Greatest City" that was just dumb.

I'm still not fond of L.A. (my mom lives there). But I do like the idea of defensive affection. That's how I feel about Baltimore.

My proposed slogan for the city (but nobody ever listens to me):

I've seen MD State Troopers at BWI (indoors and outdoors) riding Segues but they get their regular smokey the bear hats, no bike helmets.

It actually seems sensible for a sprawling, mostly flat airport. You can always ditch the scooter and run up stairs if you have to.

It's less stupid at an airport. But what's wrong with a bicycle? At probably 1/10th the cost.

And I don't say this to their face, but those smokey bear hats state troopers often have... well... read what I say above about police in bike helmets.