What do you expect?

"The longshoremen were paid $50,000 to $100,000 for unloading a single duffel bag of cocaine." I'm glad nobody has offered me that kind of money for that kind of work, because I don't know what I would do.

Meanwhile the tunnel from Mexico business is booming, which is an unfortunate but inevitable result (along with migrants dying in the desert) of building a big wall in a stupid attempt to "seal" the border. It may not sound ideal (hell, it's not) but we have to accept that we can't completely control our borders. I'm sorry if you don't like it, but that's the realty. Does that mean we shouldn't try to seal our borders? Well, actually, yes. Because attempts to "close our border" creates unintended consequences that are even worse. 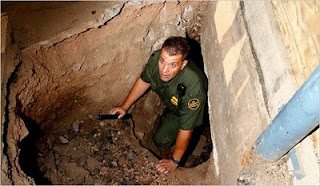 So we need to figure out the best policies we can implement with porous borders. It actually is better to have people and contraband cross on land than underground. Sure, people could always have built tunnels, but they didn't. It's an scary development because we have almost no control over what goes through the tunnels. We actually had a bit more control over what came across on land.

And once again, I'd like to point out that these problems are not caused by drugs. They're caused by the war on drugs. It happens again and again.

I'd take the money and go for it. That's real money to most people.