My wife sent me this: Muslims Wearing Things. She would also like to point out if Muslims were going to crash Juan William's plane, they probably wouldn't be dressed in conservative Muslim garb. That should make Juan a little more relaxed next time he's in an airport.

Now don't get me wrong, I think it's crazy that NPR fired Williams for expressing his own irrational personal fears. But no, it's not OK to think terrorist every time you see a Muslim (or a Greek priest... I wonder what ever happened to that idiot who attacked a Greek priest because he thought he looked like a Muslim terrorist.)

Now you may also get the willies if you think there's a Muslims on your plane. I unfortunately suspect many if not most Americans share this fear. But that doesn't make it right. Thinking every Muslim is terrorist is just as wrong (and absurd) as thinking every black man is rapist, every Jew is money-grubbing shyster, every gypsy is a thief, every gay man is a pedophile, every cop is a bastard, or.... you get my point. I think I've said enough.

Update: In the case of the marine reservist who attached a priest for looking like a Muslim terrorist, all charges were dropped. The priest didn't stick around America to press charges. To rehash, this idiot chased a Greek priest for three blocks and beat him with a tire iron while telling a 911 operator (listen to the call here):

So let me get this straight. This priest, who says he was lost, looked like he was from Afghanistan, tried to rob the idiot, then grabbed his balls, and then yelled "Allahu Akbar."

The prosecuting lawyer called this 'roid rage noting the attacker is "a 220-pound pharmacy manager who blogs photos of himself flexing his muscles and had worked as a drug informant for police."

The attacker, after charges were dropped, says he forgives the priest. Gee, that's mighty Christian of him.

Here's a picture of the attacker. 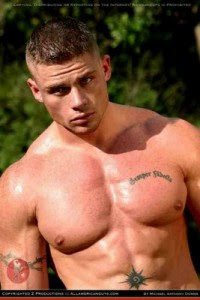 He's not gay at all.

Email ThisBlogThis!Share to TwitterShare to FacebookShare to Pinterest
Labels: politics

I hope this gentleman got kicked out of the Marine Corps Reserve.

The military has enough problems right now without letting this guy get anywhere near combat. I have no problems with gays in the military, but I do prefer we keep out the psychotic assholes.

I'm anti drug war, but taking roids for anything but a legitimate medical need is just stupid. The good thing though is steroid use can lead to both infertility and impotence keeping this hero from breeding.

Although, I'm guessing the last time this guy was in a vagina was on the day he was born. He should just get off the roids, get some psychological help, and start watching "Glee". He would likely be happier and the world would be a safer place.