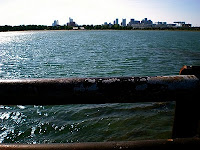 Years ago, late at night, I used to ride my bike through South Boston a lot (the Castle Island causeway was a great destination). But it just so happens that Southie was home to some of the stupidest must heroined-out white people you'll ever meet.

It's like a little bit of South Baltimore right in yuppie Boston, but more racist. I felt more ill-at-east in parts of Southie (and also the white parts of Dorchester) than I ever did in the ghetto. And I'm white!

Going through Southie I had to stay on our toes (inasmuch as you can, riding a bicycle). Local yahoos would occasionally drive by and shout things like, "get a car, you fag!" or maybe throw an empty beer can. It may not sound so bad until you realize how defenseless you are on a bicycle, and how their little "joke" could easily kill you. "Ya honor," they would later say in court, "We didn't mean him to die. We was just kiddin' around, ya know, havin' a good time. We didn't know he was going to fawl off his bike when we bumped him with ah caaah"

Sometimes I'd ride with my roommate after our job at the restaurant ended and the bars had closed. After 2AM the streets were empty. We had a routine--which we still joke about even though we never had to use it--if somebody wanted to run us down for being "bike-riding fags" or some other similar offense. Johnnie, cause he could put on a wicked-thick local accent, would say, "Naw, we ain't fags, this is for the Jimmy Fund! We're doin' it for the retaaaaded kids!"

Anyway, Southie has gentrified quite a bit since the 1990s. But apparently, not enough.

Hey Pete,
Boy did these guys know you or what? I have known you were a homo for years now and they knew it just from you riding a bicycle. Your lucky I wasn't a cop in Southie, because I would have locked your ass up because I know damn well you didn't have a light on your bike.

You wouldn't have been able to catch me, big boy!

You gotta admit, a Hahvahd grad student riding a bike in South Boston at night is kinda askin' for it. No, really asking for it.

It's not like I'm wearing a friggin' Harvard sweater or my bike has a giant glowing crimson H.

Is everybody biking fast through South Boston at night "asking for it"?

You know, that "asking for it" concept kind of pisses me off. What exactly was I asking for? Somebody potentially killing me because I was riding a bike through "their" neighborhood?

I was a fucking glorified busboy getting off work.

What the hell does where I was going to school have to do with anything?

My friend graduated from a suburban community college. Was he "asking for it," too?

Actually, no. He didn't. He's pretty salt of the earth. He's now a bartender who lives in Somerville.

At least now you're cracking me up rather than pissing me off.

While you appreciate all the subtitles of class conflict in Boston and America, I just want to ride a bike without getting killed.

And just for the record, we are better than idiots who beat up strangers.

My intent was to crack you up from the beginning; sorry it took so long.

It goes without saying that Boston brahmin and their hangers-on should be able to bike through any part of the commonwealth with impunity. In the olden days the Southies knew to step aside... lest the goon squad show them the way to the Mystic River's muddy bottom. How far the little empire has fallen.

And the fact that your guy lives and tends bar in Somerville... well, these days that could just mean he's a novelist who hasn't yet combined forces with a bicurious hipster doctoral candidate from the FAS, pooling rent and eyeing choice flats in Porter or Central Squares.

Riding a bike without getting killed was never guaranteed to a man south of the Charles and north of Stonington.

You could get killed for riding a bike in Charlestown, too.

Sorry. I thought you were serious. I'm a bit slow at seeing humor in killing-bicyclists jokes. Because it happens.

And my friend works in Boston. Upscale, too. So there you go.

In Baltimore, bikes were so rare, they didn't know what to make of me ("dang... how does that thing stay up by itself?"). I've never had a problem riding in New York.

I was with my friend the day they put benches in Central Square. It seemed crazy at the time... And then heartbreaking when they tore down the building of the last feta seller in Cambridge (who happened to Ethiopian, right were the buses start). You can't go home again.

Sometimes I miss living in Inman Square. I felt at home in the neighborhood. And I miss the old Abbey Lounge (before it closed and before they had music). When I moved there were about six non-upscale bars on Beacon/Hampshire. Now there are none. "Pete," Steve the bartender at the Abbey once told me, "You'll never find the woman of your dreams in here. You'll be lucky if you find a woman with all her teeth."

"...when they tore down the building of the last feta seller in Cambridge..."

Just thinking this thought in South Boston will get you killed dead.

There's going to be a rumble: St. Constantine and Helen versus St. Brigid.

(The Greeks of Central Square are gonna get our asses kicked.)