You know how "kids these days" think everything in the world is online and can be found with Google? Well, find this: John B. Trevor's 1919 Ethnic Map of New York City.

I've wanted this map ever since I saw it.

Trevor, non-elected but politically powerful, was worried that immigrants (Jews in particular) were going to take over America. As a Nativist S.O.B., Trevor didn't generally trust people who weren't anglo-saxon, white, and Protestant.

Of course, to some extent, Trevor's worst fears have come true: compared to 1919 America, immigrants have taken over America (and, of course, vice versa)! Trevor was wrong because he thought such seditious people would surely take over through armed socialist revolution.

So ever the self-professed patriot, Trevor made a map of ethnic New York City, listing radical social clubs and liberal newspapers, to aid the police and national guard in the suppression of the revolt that never came. 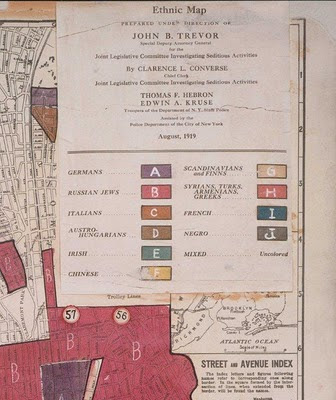 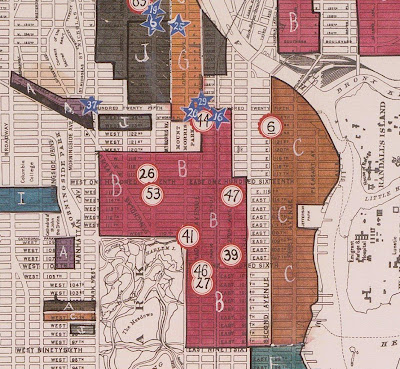 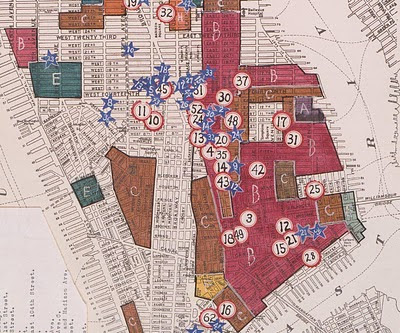 New here? Well, welcome! You're probably interested in history and urban life. If so, you'll love my book, Cop in the Hood (or maybe you just liked The Wire?).

Why not read the first chapter of Cop in the Hood. After that, you can shell out your hard-earned pennies -- but only 1,241 of them -- and buy it at Amazon.com. What a deal! Still need to be convinced? Read the reviews. Or just look at the rest of my blog. No shame in that. And it won't cost you a cent.

Email ThisBlogThis!Share to TwitterShare to FacebookShare to Pinterest
Labels: for academics, immigration

I WANT A COPY. Will pay big (well, medium-sized) bucks! Very very cool. Hope you and Z are doing well.

i think a hundred bucks is reasonable for that

OMG< i love this map and have been looking all over for it...I first saw it at that egyptian resturant in astoria, mombar, years ago . . .

The map is now for sale at Quimby's NYC! He will ship. https://www.facebook.com/quimbysnyc/