The Face of a Killer

[update: Hey, look at the picture below and then the picture of me to the right? Do you think we were separated at birth? Or maybe I just photo-shopped all the cops holding me out of the picture.] 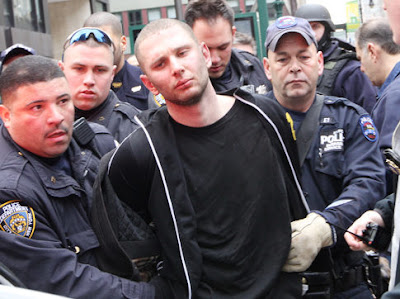 Should I be bothered by the fact that I'm always somewhat relieved whenever I find out that some murderer, in this case "a troubled man with an arrest record and a reputation for a hair-trigger temper," just happens to be white?

Is this some weird vestige of liberal guilt? Or is this logical relief at knowing 1) what some would would say if he were black or Latino, 2) feeling obliged to argue against some irrelevant and racist theories on race, and 3) then somehow having my words twisted by idiots who would say I'm justifying the actions of murderer?

Here's the coverage in The Daily News. 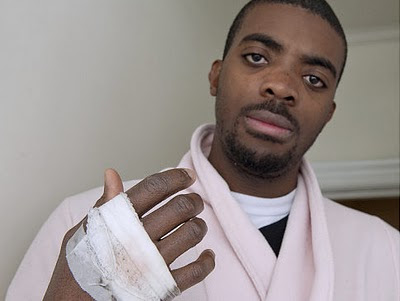 I think that is exactly what it is. If a white guy goes on a rampage, people just say, "oh what a wacko" (though he may or may not be mentally ill).

Working in a healthcare environment I have similar odd feelings regarding victims of violence. If I am in ER and a white person comes in shot, it is almost like a novelty? Whoa really, so was it a hunting accident? A domestic?

I don't feel as compelled to ask about the cirucmstnaces when a young black male comes in shot. Unfortunately, the scenario is all to familar now: A dude walked up to me and started shooting somewhere on the southside. I don't know who he was or why he would shoot at me. Don't know nothin' 'bout nothin'.

In a society that didn't have the screwed up history involving racism that the U.S. has, I don't think you or I would have these strange feelings. We would just say, "man, human beings are so violent." That would sum it up, because that is true. As Gavin de Becker discussed in "The Gift of Fear," what lower animal kills for vengance, greed or for fun. The answer is none of them. They only kill in defense or for food. Humans are unique in this regard.

Not to ignore your bigger points... but don't chickens and other fowl kill for pecking-order status?

Oh yeah, probably. Though that could probably be construed as being for a biological need (mating). I confess that I have not studied cocks much. Oops, that sounded wrong!

Some might consider de Becker an expert on certain human tendencies but his take on animals is unmitigated nonsense. Google around on dolphins, lions, wild dogs, ants, etc. if you want to see animals doing violence that sure as hell doesn't seem to be hunger or self defense.