Hopefully just a very small part of it.

I try not and make the Nazi comparison lightly, but people, this is American fascism. You know you're a fascist when:

You wrap yourself in an American flag to call another group of Americans terrorists, killers, and pure evil.

You wish another group of Americans an early death for no other reason than their religion.

You tell people born in this country to "go back home" (Only native American Indians should be allowed to use that line).

Any others you can think of?

And in some ways these idiots are worse than the Amerikadeutscher Bund of the 1930s. Sure they're all ignorant, hate-filled, nativists who wrap themselves in the American flag. 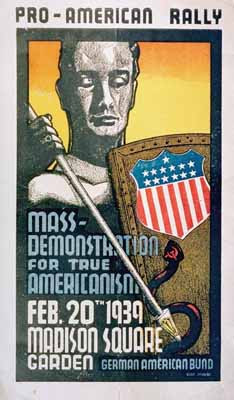 But at least The German American Bund of the 1930s, wanted to keep us out of war. And at least the old-time haters were kind enough to carry around swastikas, making them much easier to spot. Oh, look, there they are parading in New York City: 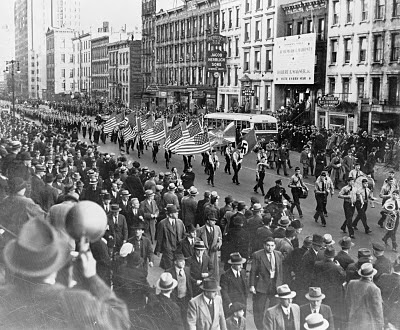 I'm not certain what these new extremists want (many of whom are elected Republicans) want, even if you could peel away the hate.

Since now England seems to be the bad guy, ever since they've fallen under Sharia Law (note: they haven't), can we have Freedom Muffins for breakfast?

There are other historical comparisons. In fact, just about the only comforting thing about this is the knowledge that other ethnic and religious groups have been the targets of similar fear/hate campaigns, ones that were often much nastier than this. But today, Catholics and Jews and Irish and the rest (mostly) are OK. (The other possible comfort is that it looks like wasn't a very big turnout.)

And with the support of politicians, who, in theory, represent a plurality of voters in their district.

Jay, I know historically it may not be a big deal... but when in the past 35 years have we seen something like this?

To put it in historical perspective ignores the crucial fact that this isn't history. This is happening today, to American men and women.

I could only bear to watch about 30 seconds, once the initial text had finished.

What's most disturbing is that this is NOT unique to American history. "The Land of Opportunity" has made concerted efforts to deny that opportunity to anyone who doesn't fit the classification du jour since its inception.

I'm 55 years old, and the disillusionment I have felt on the last five years cannot be measured, as I have figured out how much of what we were taught to believe in as children was bullshit.

The fact that this rally is in Orange County is not that surprising. OC has a long history of being a center of violent skinheads in California. I'm actually surprised not to see any standing out front in the crowd. The question is; is this just the same people "grown up" (and I use the term only temporally, not in maturity), or is this people who use to stand to the side now stepping forward?

I thought the schools in the suburbs were better at educating people? Rim shot! Thanks folks I'll be here all week. Tip your waitresses and have the veal.