There's a hole in your boat!

This is good news for Republicans, supply-siders, and those who like to stick their ideological economic heads in the sand: the rich are getting richer. The top 0.1 percent of the population (those making about $1.7 million or more) now have an average income of $5.6 million per year. This is a 385% increase since 1970 (inflation adjusted). 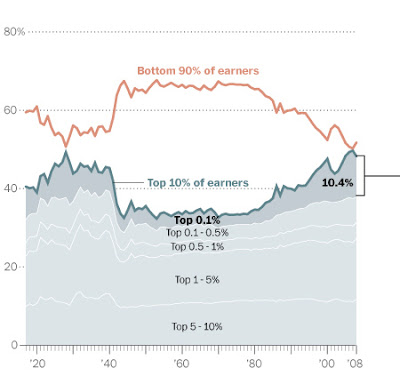 Think of all the jobs the rich people must create! Think of the rising tide, which raises all boats! You do understand how the tide works, right? Except for the fact it's a pretty shitty analogy when applied to the economy.

You see, the system? It ain't on the level. I think of Paddy "Chicago Ain't Ready For Reform" Bauler's other line: "Them guys in the black suits and narrow ties, them Ivy-League types, them goo-goos - they think the whole thing is on the square." Except these days it's not the Ivy-League types who think that. It's too many of the rest of us who have been deceived. It's people who, despite all the evidence to the contrary, buy the crazy idea that tax breaks for the rich benefit the rest of us.

It's no surprise that the rich look out for their own self-interests. But the rest of us don't have to help them! For starters, we have to put words and concepts like "income redistribution" are taboo. There is nothing "communist" about progressive taxation. And there is much evidence to support the idea higher taxes on the rich benefits all of society. And that even benefits the rich.

Email ThisBlogThis!Share to TwitterShare to FacebookShare to Pinterest
Labels: politics

Why do you think Republicans are happy about the growth in income inequality? I'm not sure what I'm supposed to learn from this post, other than the fact you enjoy gloating.

I think rich Republicans are very happy they have more money. I think poor Republicans believe the party line.

You're also supposed to enjoy my writing. If you don't like it, please don't read it. I don't get paid for this.

As to gloating... I do sometimes do so. And where's a better place for that than my blog?

But I don't mean to gloat in *this* post. I'm not happy the rich get rich and poor get poor. I'm trying to maintain an outraged tone of disbelief. If that doesn't come off, I didn't write it well.

The part I find most salient is the ability of the rich to advance their interests via the government. I do not begrudge a person's success, but when they use the force of the state to disadvantage their competitors they acting immorally and against the good of society.
For this I'd like to see less meddling from the officials b/c they so often favor their rich friends, less subsidizing and tax breaks for companies... fewer bailouts - banks or automakers.

I don't begrudge a person's success. I just want to take some of their profits to pay for a working and civil society -- the society that is the foundation upon which their success is based.

And remember those companies that we bailed out because "they were too big to fail"? Well, why haven't we made them smaller? Unregulated Capitalism has never succeeded. The very idea that regulated capitalism is somehow bad is a shockingly new concept. And dangerously flawed.

Of course the companies won't do this on their own. How great to be large, making billions in good years and knowing that if things go wrong, the government will cover your loses.

As Yakov Smirnoff used to say (maybe he still does), "What a country!"

The markets will always be, and have always been regulated.
I don't think "we" needed to make them smaller - I think letting them fail would have made them a proper size.
I find the ease with which you endorse "taking" other people's rightfully gained success. If a company makes it's profits without subsidy or other state advantage (I know, this isn't common for big ones) then all profit it makes is a result of making other people better off already through the voluntary exchanges of goods and services. So they have been improving society.
I expect this to not resonate, but isn't it true that when you exchange (buy or sell) you improve your lot (or try to)?
I expect the objection will be based on how some people don't have good alternatives. This may be true, but it doesn't mean that the exchange wasn't undertake in an attempt at self-benefit by both parties.

The exchange does indeed benefit both parties. But think of a country without minimum wage laws. People will still work for whatever they can get. Even if it isn't enough to feed your family, it's better than nothing. One meal a day is better than no food.

So working for sub-sustenance wages can be in your best interest. In that sense it is a "good" exchange.

It's exactly why the government needs to step in and demand better labor laws and/or a government safety net funded by the profits of corporation who could, but choose not to, pay their workers more.

(so yes, I agree with your last two sentences very much)

But then minimum wage laws tent to hurt employment, b/c some jobs just aren't worth that legal lower limit to the employers...
Pretty much every company in the world could "pay their workers more" to some degree. The idea that someone who has no involvement in the company is in a better position to set the exchange, or that you and I have the right to task someone to set the rules of interaction between two other people, is problematic from moral reasons (assumption of power over others) and ignorance (we lack knowledge and direct stake in the matter).
Generally we agree that the rich get too much help staying that way from the government. I just think adding power to the government and expecting it to not help the rich more is a futile pursuit.
Got your book yesterday (Cop in the Hood)

It is dangerous to tackle the economy issue when you have rich and poor in your mind. It's fallacy (wink wink). Take a step back, think of yourself as a tax law professional and may be you will understand the matter little better. I don't know much about tax law but according to my legal research professor: tax law is the most hideous to study. However, may be we can start with something simple: practice Separation of State and Church by prohibiting money laundering between any entities(including the government, corporation, individual, charity, non-profit, church, or any religious establishment)