What could be more fun than spending a few nights biking around the back alleys, roundabouts, and estates of Basingstoke with a bunch of cops? (One of whom tweets) 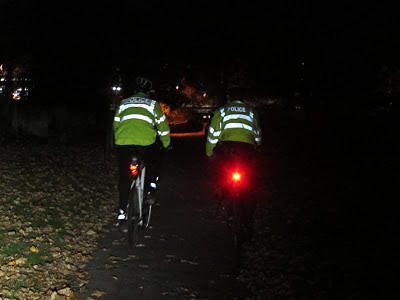 Seriously. This is my idea of a good time. 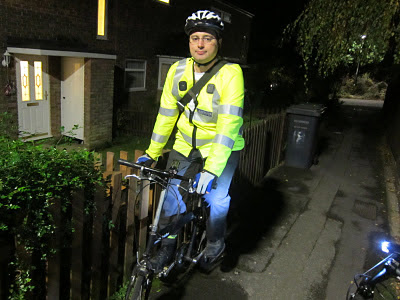 Word on the street (or at least in the station) is that I'm the first observer to ever go on bike patrol in these parts.

Actual word on the street, however, is more the sound of pesky youth laughing at my folding bike. Whatever. It did the job.

And to answer the first question US cops will have: 1) No, (most) police do not carry guns; 2) Most do not want to. More than one has told me he's consider quitting if he were ever ordered to patrol armed with a gun.

There are 140,000 British police officer. Not one has been killed on duty since 2007. That level of officer safety is kind of hard for me to fathom.

Email ThisBlogThis!Share to TwitterShare to FacebookShare to Pinterest
Labels: for academics

If you ever check out some of the UK police bloggers, quite a few are in favor of being armed and it doesn't sound like a safe job to me.

As there are more than 140000 officers in England and
Wales alone I think you need to revise your figures. Don't forget scotland and maybe northern Ireland next time!

And unfortunately, there was a policeman killed on duty in England last month. Last year, a PC and pcso's lives were saved when attacked by a knife wielding maniac ( who didn't pay his bus fare) because a surgeon happened to be walking past and secured the multiple slash wounds to the head.
Check your facts, your ignorance is offensive to many.

Read up on inspector gadget.

As to officers killed, I used http://www.policememorial.org.uk/. Is it not accurate? I still can't find the one you're referring to. My apologies.

But again, my point is that it is much safer to be a police officer in England, Wales, and Scotland than in the US.

As to total number of officers,
that's why I said "more than." Often, when I mention how few homicides there are in England, Americans dismiss the numbers by saying, "it's a small country." We are indeed ignorant. My point is simply that there are a lot of police officers officers here. And to go years without a single officer being shot and killed is amazing.

Inspector Gadget is a well known blog. I enjoy reading it. He represents one view. From an American perspective, saying an officer wants a gun is a dog-bites-man story. Hearing that police do *not* want to be armed, hearing officers tell me they have no firearm training and think carrying a gun is incompatible with police work... that's man bites dog! Such a concept borders on incomprehensible to my American policing ears.

While there may be less officers killed there, I have to wonder about the injury rates from knives and the like. I've watched several youtube videos that show unarmed officers having to go up against subject with knives, swords, or clubs. It seems criminal to me to ask an officer to go into that situation without a gun. Hell, they don't even issue tasers to most officers!

Every other police force in the world (except maybe Norway) goes armed. There is no acceptable reason why UK cops have to do the same.

As to some UK cops not wanting a gun, I think that is because they have zero experience with them. Put them through a basic firearms class to get them comfortable with them and I doubt they will keep that opinion.

"There is no acceptable reason why UK cops have to do the same job without the proper tools."

Johnny Law:
The tools define the job. Give cops tasers, too many of them start to define the job as obtaining the respect of civilians, and define "respect" the way that any hoodlum would: naked physical fear.

I have no opinion on cops bearing guns and admit that tasers, used properly (i.e., as a less-lethal alternative to a gun), could be great tool. But I'm not sure enough cops use tasers properly.

Reminds me of my college's motto, "...in the nation's service." Always seemed kind of old-fashioned to me. Hard to imagine most college grads (including myself) thinking that way. Maybe my "modern" perspective is a shame.

Hey Fatboy,
Boy you are really packing on the pounds. Your face looks like a water balloon in that picture. I hope you are enjoying your trip.

"I don't think I've ever heard a cop in the US proudly describe themselves as a "public servant.""

What did you describe yourself as when you were standing in the middle of the ghetto dealing with a drunken disturbance?

I didn't see myself as their "servant."