"Beware of the Risen People"

In Dublin, these neighborhoods with their uniform rowhomes remind me of Baltimore. 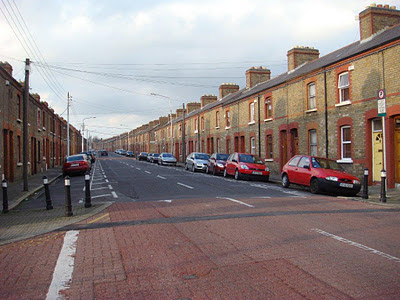 The grittiness of Dublin was a bit of a refreshing shock after the pastoral beauty of rural Hampshire. Even though I have nothing but nice things to say about the English, in Ireland I felt like I was back on home ground. From where I'm from (Chicago, Boston...) England feels more like a foreign country.

My friend in Dublin lives next to Aubourn Prison. 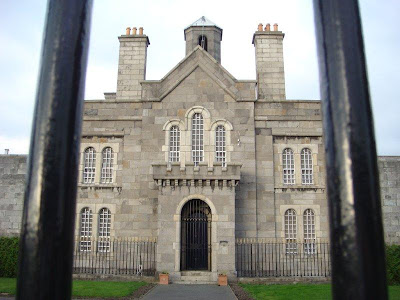 "Holds pedophile priest," she assured me (but not, I should note, from the Greek church next door).

A short walk past leads to the old Kilmainham Jail. It closed in the 1920s and stands today as a museum, but less to prisons than to the "Heroes of 1918" and Irish independence. Suffice it to say my knowledge of Irish history is a bit thin up top. 1918? Revolution? Civil War? Indeeeeed...

But I was keen to go to this prison because it claims to feature a Panopticon.

Actually it's not a Panopticon because it's not, well, round with a centrally located guard post designed to provide constant potential surveillance inside each prison cell....

But Kilmainham Gaol was, with its multi-tiered layout, inspired by Bentham's evil concept. And the architecture is cool. 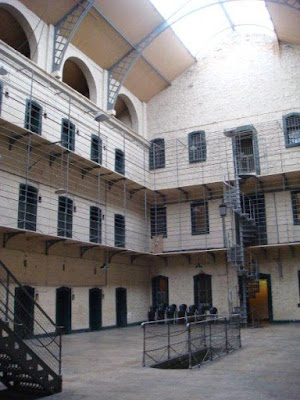 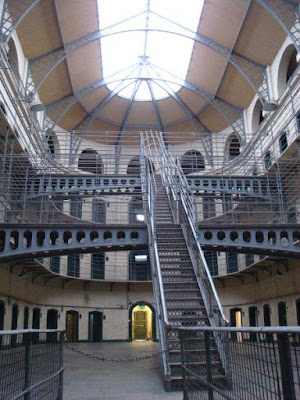 Typical of early prisons, starvation was used as a tool in place of corporal punishment. More humane, said the Progressive thinking of the time. In 1884 C.S. Parnell testified at the Royal Commission on Prisons in Ireland:


One thing that struck me in Kilmainham was the semi-starved aspect which all the convicted prisoners presented. They seemed to be utterly dejected and weak, and unable to undergo any amount of physical fatigue.... I do not think that we are entitled to enfeeble the bodies of prisoners in order to reform their minds, or with a view of maintaining discipline amongst them.

Unlike contemporaneous American penitentiaries like Auburn and Sing Sing (which, unlike Kilmainham, are still operational), Kilmainham's cells didn't have plumbing. So prisoners in Ireland had to "slop out." Even more amazing, today, in 2011, the practice of slopping out is still practiced in at least one Irish prison.

Meanwhile, from the museum at Kilmainham, I'm always a sucker for revolutionary propaganda. 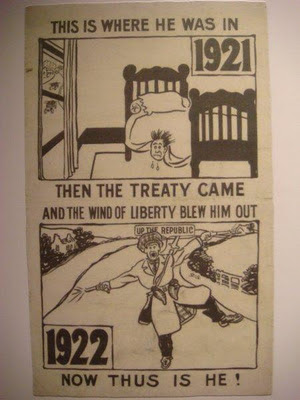 And Irish Mothers, Do You Want Your Children Kidnapped?: 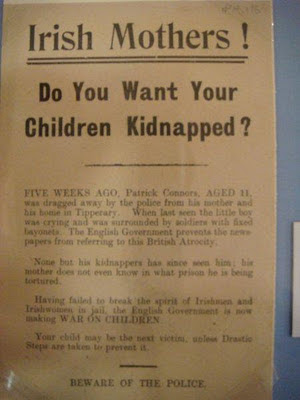 "Beware of the Police"The highlight of the trip, however, unrelated to prison, must have been hearing Travelers sing while we were "on the Batter."

Beware of the Risen People. 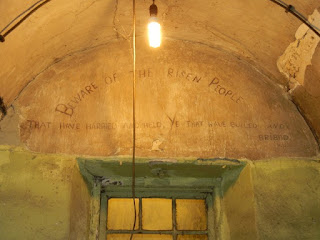 here is an example of some truly profound Irish folk music.

Those posters are great.

This is the closest I can find to the kind of singing we heard:
http://www.youtube.com/watch?v=FMmBllRWqoI

Actually you can hear singing similar to that in Chicago at bars frequented by Irish immigrants.

I'd guess the same can be said about NYC.

Since the Irish economy is now in the toilet it should be easier to find such bars and singers.

About twenty years ago I saw a guy sing like that at the Abbey Pub on north Elston in Chicago. He was a skinny little fooker who was seemingly underemployed and would sing for a Guinness.

He didn't look like much, but the man could sing.