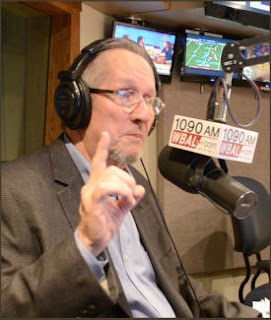 Ron Smith was a newspaper columnist and radio host on WBAL in Baltimore. He died two days ago.

Ron was a conservative and a libertarian. Suffice it to say, I'm not. We agreed on a few issues--like the stupidity of the war on Iraq and the war on drugs--but we disagreed on a lot more. And still he liked me; and I, him.

I was on his show maybe a half dozen times, sometimes by phone from New York, but whenever I was in Baltimore, it seemed like I could just drop by the studio for a chat. The discussions were simultaneously serious and lighthearted, and also much more intellectual than most anything found on commercial radio. His talk show was passionate (interrupted, unfortunately by far too many commercials) and based not on jingoism and ignorance, but on analysis, knowledge, and an keep understanding of history and current events.

I liked the repartee Ron and I developed during our time on air, and he seemed to take me under his wings. At the end of yet another appearance promoting Cop in the Hood, as the show came to a close, he looked at me with a big smile and said, "All right, kid, I've done everything I can for you. Now get out of here!" A true mensch.