Couldn't have said it better myself!

They say imitation is the sincerest form of flattery. I was flattered enough to send this letter to the New Yorker:

As a long-time New Yorker subscriber, I was thrilled to see Adam Gopnik’s recent article, “The Caging of America.” I appreciate Mr. Gopnik bringing this important subject to the attention of the New Yorker’s readers (and I couldn’t agree more with his overall points).

Incarceration is a theme I am quite interested in. So much so, in fact, that I wrote a book on the subject, In Defense of Flogging (Basic Books, 2011). Mr. Gopnik may have come across my book in the course of his research as it seems to me that he referenced my book numerous times in his article.

Perhaps I am too familiar with the subject, but many of his phrases bear a uncomfortable resemblance to my own published work (examples follow). At the very least, it would have been nice to be acknowledged.

1) The US prison/Soviet gulag comparison.

“The Caging of America”: Over all, there are now more people under “correctional supervision” in America—more than six million—than were in the Gulag Archipelago under Stalin at its height.

In Defense of Flogging: Stalin, at the height of the Soviet gulag, had fewer prisoners than America.

2) The US City of Incarceration.

“The Caging of America”: That city of the confined and the controlled, Lockuptown, is now the second largest in the United States.

In Defense of Flogging: If we condensed our nationwide penal system into a single city, it would be the fourth largest city in America, with a population more than Baltimore, Boston, and San Francisco combined.

“The Caging of America”: Every day, at least fifty thousand men—a full house at Yankee Stadium—wake in solitary confinement.

In Defense of Flogging: At a sold-out baseball game in Chicago, forty-one thousand people can watch the Cubs at Wrigley Field. Two-point-three million is more than fifty-six sold-out ballgames.

“The Caging of America”: (Lock yourself in your bathroom and then imagine you have to stay there for the next ten years, and you will have some sense of the experience.)

In Defense of Flogging: Consider one California inmates account of prison life: “I live in a bathroom with another man, rarely see my loved ones, Im surrounded by killers and thieves.”

“The Caging of America”: More than seventy thousand prisoners are raped each year—that it is routinely held out as a threat, part of the punishment to be expected. The subject is standard fodder for comedy.

In Defense of Flogging: Approximately one in twenty prison inmates say they’ve been sexually assaulted by other inmates or staff in the past year.... And yet we still joke about prison rape. ... comedian Chris Rock popularized an account.

“The Caging of America”: We lock men up and forget about their existence.

In Defense of Flogging: Troublesome people are out of sight and out of mind—picked up off the street and all but disappeared.

“The Caging of America”: Then, in 1983, inmates at the maximum-security federal prison in Marion, Illinois, murdered two guards. Inmates had been (very occasionally) killing guards for a long time, but the timing of the murders, and the fact that they took place in a climate already prepared to believe that even ordinary humanity was wasted on the criminal classes, meant that the entire prison was put on permanent lockdown. A century and a half after absolute solitary first appeared in American prisons, it was reintroduced.

In Defense of Flogging: Things changed, however, in 1983, when inmates in Marion Prison killed two guards in two separate incidents on the same day. Marion immediately went on lockdown and remained there—for the next twenty-three years.... Reincarnated after nearly a century’s absence, the concept of near-total isolation spread from Marion, Illinois, to the world.

“The Caging of America”: Neither the streets nor the society is made safer by having marijuana users or peddlers locked up, let alone with the horrific sentences now dispensed so easily. For that matter, no social good is served by having the embezzler or the Ponzi schemer locked in a cage for the rest of his life, rather than having him bankrupt and doing community service in the South Bronx for the next decade or two.

In Defense of Flogging: Certainly mere drug offenders should not be kept in prison, nor should white-collar criminals. Bernard Madoff, famously convicted in 2009 for running a massive Ponzi scheme, is being incarcerated and costing the public even more money. Why? He’s no threat to society.

“The Caging of America”: The natural rate of incarceration seems to hover right around a hundred men per hundred thousand people.

In Defense of Flogging: We might consider 100 per 100,000 a somewhat “natural” rate of incarceration. [A phrase I believe I coined.] 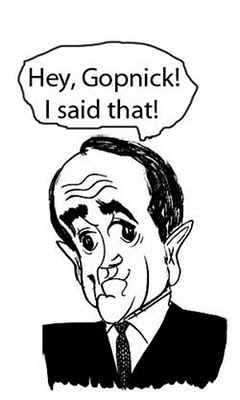 And in case you're wondering, this image has been blatantly stolen from Gawker.

Email ThisBlogThis!Share to TwitterShare to FacebookShare to Pinterest
Labels: In Defense of Flogging, incarceration

Gopnick's stuff for the NYer is not scholarship. Apparently, the mag does not require him to to give footnotes or a bibliography. (I wonder what the NY Review of Books would have done with such a piece.)

Looks to me as though he read your book and probably a few others -- he mentions only two -- and worked from his notes and underlinings. Did he borrow your ideas? Probably. Is it plagiarism in any legally actionable sense, probably not.

But it is the sort of thing that Gawker may still be interested in.