There were many periods of silence in the police academy. The environment didn't exactly encourage free and independent thinking.

During these awkward moments, Agent Cassidy, when he was in the room, was fond of bellowing out, often apropos of nothing, "Moskos, your thoughts!" Thirteen years later, these might be most (only?) remembered words from the academy class of 99-5.

David Simon writes about Cassidy in the Sun (unfortunately, it seems, behind their new pay wall). You can't say "if it weren't for bad luck, Cassidy would have no luck at all." He's had his share of good luck. He's alive, right? But he's had more that many people's share of rotten luck as well.

Now Cassidy has end-state liver cirrhosis. Seems he got Hepatitis C from a blood transfusion after being shot. He needs a new liver. Cassidy was shot in 1987 trying to apprehend a man wanted for partially blinding an old man who had the gumption to tell the bastard to stop beating a girl. Cassidy pulled up on a corner and tried to take him in. There was a fight. Cassidy doesn't remember the rest, because he took a couple of bullets from a .357, one at point blank range to the forehead. But for some reason Cassidy didn't die, though he did lose 100 percent of his sight, smell, and taste.

Cassidy went on with life, had kids, learned to get by with a guide dog, went to work, got a masters degree, and began teaching law class in the police academy. (Then, outside of shooting and driving, the only well-taught class in the Baltimore police academy. He said he wanted his kids to see him go to work everyday.)

Cassidy's shooter was later arrested and (barely) convicted. Seems most of the fine city jury had no opinion and simply wanted to go home (I had forgotten these details):

A college student training to be a special education teacher, the young juror, allied with an older woman, fought a pitched battle to bring the rest of the jury around. It was a transforming experience, so much so that years later, that juror would be a Baltimore City prosecutor, her life changed by the experience in that jury room.

It would be another 12 years, during my time on the force, after the killing of Officer Kevon Malik Gavin, before a city jury would actually be stupid enough to let a cop-killer walk free.

Because of the Cassidy shooting, tactics in Baltimore changed. We wait for backup (right?) before putting the cuffs on a suspect. We don't put people against walls they can push off of and spin around on us. Also, we're inspired by Cassidy's life and more thankful for some abilities we are all too quick to take for granted.

"You know what I would have done differently?," Cassidy says in a video in his memorable staccato delivery, "Very simple. I would have taken that day off. Right?"

Another 'Signal 13' goes out for Police Agent Gene Cassidy who was shot in 1987.

Baltimore City FOP Lodge 3 is holding a Blood Drive/Liver Donor Information at the FOP Hall on Monday, March 19th from 11:00am-6:00pm. This Blood Drive is in Honor of all Injured Police Officers, Firefighters, Medics and our Military Personnel serving the United States overseas. Come out and support one of our own heroes - Gene Cassidy of the Western District.

Here's me with Agent Cassidy and my parents, on the day of my graduation from the police academy, April 14, 2000. 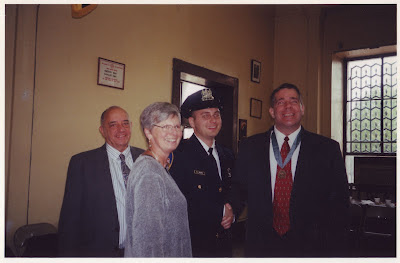