Stop, Question, and Frisk in court

Mr. Esposito insisted that a supervisor could conclude that a stop was legal based on reviewing that form alone. 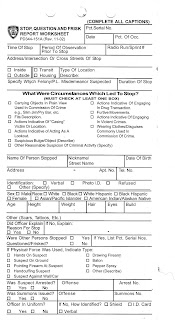 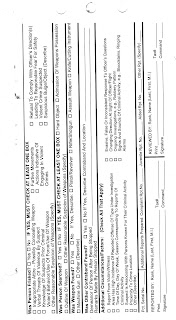 Again from the Times:

But Judge Scheindlin appeared skeptical that the paperwork proved anything.

“Any officer can check off ‘high-crime area’ and ‘furtive movements,’ ” Judge Scheindlin said, referring to two check-box categories on the stop-and-frisk form. “You really don’t know much about the stop, looking at the form, do you?”

The Supreme Court has said that officers need to be able to "articulate" (based on the "totality of the circumstances") why they have reasonable suspicion for a stop or probably cause for a search.

I noticed two colored men [Keep in mind this was written in 1963] standing at the corner of Huron Rd and Euclid Ave. I noticed one of these men would leave the other and walk West on Huron Rd. He would kind of slow his walk and look in the the United Air which is located at 1276 Euclid Ave but has a rear entrance on Huron Rd. He would then continue to walk West on Huron Rd and stop and then as he came east again he would pause and again look into the United Air lines. When he came back to Huron Rd and Euclid he would talk to the other colored man and the other man would take the same walk and do the same as the other other man pausing in front of the United Air Lines. During the time I was watching them they made about three trips each. While they were together at the corner I saw [a] white man who came east on Huron Rd stop and talk to these two colored men and after he left them he walked west on Euclid Ave. I could not see him after he left these men and can not say where he went or what he did. About five minutes after this white man left the corner these two colored men met the white man again and they stopped and talked. At this point I approached these three men and informed them I was a police officer and told them to keep their hands out of their pockets.

Detective McFadden patted the men down and found a couple of loaded guns.

Today, the NYPD brass has tried to make the process of describing reasonable suspicion so idiot-proof (on the horrible and somewhat self-fulfilling assumption that police officers are idiots) that Detective McFadden would simply have to check a few boxes. For "What Were Circumstances Which Led To Stop?", I'd go with, "Actions Indicative of 'Casing' Victim or Location" and perhaps "Actions Indicative of Acting As A Lookout" and then throw in "Furtive Movements" (whatever that means) just for kicks. And "Was Person Frisked?" I would go with "Actions Indicative Of Engaging in Violent Crimes." And finally, for "Was Person Searched?" Let's check "yes" and "hard object" and "outline of weapon."

Does any of this "articulate" anything about what Mssr. Terry, Chilton, and Katz actually to did? Of course not.

Would it establish reasonable suspicion, thus disproving racial profiling? Esposito says yes. The court is going is going to say no.

One irony of all this is that the "UF-250" only exists because people were worried about too many police stops. Before stops could be quantified, the department couldn't use them as measures of productivity. Now that they can be counted, the department wants more of them.

As asked in court: “Do you think focusing on the raw numbers gives the wrong impression to your subordinates?”

And the answer is an unqualified "yes."

Email ThisBlogThis!Share to TwitterShare to FacebookShare to Pinterest
Labels: stop and frisk

I fear that this practice will continue unabated outside of some lip service to qualitative stops over quantity. In the academy you need to score in the high nineties basically on the Stop & Frisk test- the same as your use of force test.

There's no quota for use of force because the mishaps would be insane.

Yet there are for an additional necessary tool for cops: Stop, Question, and Frisk.

Taking it away is like taking away a hose from firemen who've been unfairly given hose quotas. They still need a hose to put the fire out. Just stop using it as a metric of success.