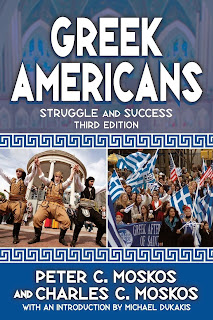 Why do I mention this? Maybe because it all started when a Greek-American shot and killed South Omaha Police Officer Ed Lowery. Or maybe not.

Look, this has nothing to do with police (except for the aforementioned killing), but my third book is finally out. It's done. It's a Moskos and Moskos production. It has a dorky cover. And you can buy Greek Americans on Amazon.

But let's be realistic: I know you're not going to buy this book for yourself. But you might buy it for that Greek guy or girl you know. And come on, you do know a Greek. We're everywhere. And Greek Americans are guaranteed to love a book on Greek Americans. Why? I don't know. We just do.

And just think... if give it to that Greek who runs that diner you like, you might get free baklava for life! Why? Because that's how we Greeks roll.

On the outskirts of South Omaha, Nebraska, was a shantytown of perhaps 3,000 Greek laborers, a number swollen by unemployed railroad workers waiting out the winter. Anti-Greek feeling in South Omaha was already intense owing to the carousing and gambling of the Greeks and, possibly, because many of them were viewed as strikebreakers.

The precipitating incident occurred on February 19, 1909, when one immigrant, Irish-born Police Officer Ed Lowery, arrested fellow immigrant, the Greek-born John Masourides. Lowery was a family man with a labor background. He joined the police force after losing his job at a lard processing plant for refusing, in sympathy with striking workers, to cross a picket line. Thirty-six years old when he left a Peloponnesian village near Kalamata in 1906, Masourides was in many ways a typical Greek immigrant.

He was dark and of medium height, wore a mustache, could speak no English, but could read and write some Greek. He left behind a wife and four children and made his destination Sunrise, Wyoming, where he planned to join his brother Gust. In Wyoming, John worked as a miner for several months after his arrival. The brothers then decided to come to Omaha to start a grocery and confectionary. This they did in South Omaha.

Masourides was with seventeen-year-old Lillian Breese when Officer Lowery arrested him for vagrancy. Some claimed the policeman was drunk and enraged at seeing a Greek publicly walking with a “white” prostitute. Other accounts say Breese was an English teacher and Masourides her student. These two accounts, it should be noted, are not mutually exclusive. Regardless of Breese’s primary vocation, what isn’t in question is that Masourides shot and killed Officer Lowery on the way to the police station.

In court, Masourides said he was attempting to throw his pistol away to avoid being held for carrying a concealed weapon, and was forced to defend himself after the officer began firing. Other witnesses said Masourides fired first. After a failed attempt to lynch Masourides, a petition was circulated and published in two local newspapers:

The so-called quarters of the Greeks are infested by a vile bunch of filthy Greeks who have attacked our women, insulted pedestrians upon the street, openly maintained gambling dens and many other forms of viciousness.

Therefore be it resolved: That we, the undersigned citizens and taxpayers of the city, hereby believe that a mass meeting should be held on Sunday afternoon, February 21, 1909, at the city hall to take such steps and to adopt such measures as will effectually rid the city of the Greeks, and thereby remove the menacing conditions that threaten the very life and welfare of South Omaha.

During the meeting, the crowd was encouraged with anti-Greek speeches. One witness recounted hearing, “One drop of American blood is worth all the Greek blood in the world!”

Following the meeting, over the course of many hours, a mob rampaged through the Greek quarter, burning most of it to the ground. Some thirty-six Greek businesses were destroyed and all the Greeks—and many other immigrants who were mistaken for Greek—were driven by the mob from the city. Later, Mary Demos, the owner of Demos Brothers Confectionary, would testify that when she called the police station for help against the mob, the officer answering “laughed at [her] over the telephone.” Her shop was subsequently wrecked and looted by a group that Demos claimed included police officers.

Another newspaper, which was considered more moderate toward immigrants (and did not publish the anti-Greek petition), still managed to rationalize, if not justify, the rioters’ behavior:

The thing that sticks in the crow [sic] of the anti-Greek element is that they work cheap; live even more cheaply, in groups; are careless of many of the little details that Americans set much store by; once in a while are impudent, ignore the restrictions of American law that lay heavily on the true patriot—in short, do not mix, are not “good fellows” like the citizens we get from northern Europe, for instance.

The press coverage of the riots triggered copycat anti-Greek demonstrations, sometimes violent, in Kansas City, Kansas, and Dayton, Ohio. The irony of immigrant-on-immigrant xenophobia was not lost on at least one newspaper, the Shreveport Journal (Louisiana): “We note with interest that Mr. O’Shaughnessy of Omaha objects to the ‘Greeks taking America.’ As if the O’Shaughnessys and the O’Tooles and other Irish had not already grabbed it.”

One year later, Masourides was found guilty of second degree murder and sentenced to fourteen years in prison. He was furloughed by the governor after five and one-half years, deported, and emigrated, perhaps to Egypt.

The South Omaha riot was given wide coverage in the Greek American press and in Greece. The Greek government lost no time in protesting the acquiescence of the local authorities to the brutality of the mob. The Greek government, along with the Austro-Hungarian and Ottoman Empires, lodged a formal demand for compensation. In 1918 the US Congress did indemnify the Greeks, but for just $40,000 (equivalent in 2012 to $618,000) and not the $288,000 claimed.