Man, if you read the NY Post, you might think the city is going to hell. And all because a liberal is mayor and cops' hands are tied: "The attack raised fears of a new wave of anti-cop violence -- with a police union president blaming the assault on Mayor Bill de Blasio and his crackdown on stop-and-frisk."

I don't want to minimize the danger of "air mail," people throwing things from high above. It can indeed kill. But I doubt this potential murderer threw a bike at cops because police no longer make quota/productivity-goal based stops.

I also don't want to minimize the unfairness of potential lawsuits brought against individual police officers who are, in good faith, trying to do their jobs.

Even my old sergeant from Baltimore couldn't resist telling me how New York was not longer safe without all those stops, not to mention a liberal Sharpton-loving mayor in charge!

But there's one problem with crime-is-up-because-stops-are-down theory. Crime isn't up! So until crime actually does increase, can we all just stop talking about the rise in crime so matter of factly?

Here's my theory: Cops have, are, and always will stop people when they have reasonable suspicion. Why? Because that's what cops do! Call it doing your job or professional pride or whatever. Cops want to stop crime and catch criminals.

But what cops are not doing much of making stops just to meet some perceived quota. This means that literally hundreds of thousands of guys a year are not being stopped because they're wearing baggy pants in a high-crime neighborhood.

I understand that logic of why massive stop-and-frisks could have a deterrent effect on crime. And yes, school is now out, the summer is hot, and stops have been way down for almost a year.

Now this chart only goes to last year. This year stops are down, murders are down a bit, and shootings are up a bit. Overall, according to the stats, crime is basically unchanged (down 3%). But I make it habit not to rely on any crime numbers other than shootings and murders. 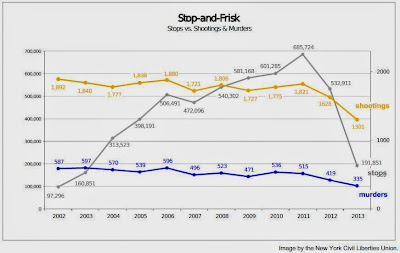 So stops are down and crime is still down. Yes, crime is up in some places, but it's down in other and overall constant. In the 75, stop are down 90% and shootings are up 30%. And leave it to a real news source to find local residents saying police need to start up those stops again!

As somebody just put it (I forget where I just heard this), "what we have now isn't a crime problem but a newspaper-selling problem." I might also add there's a bit of a problem with an ideology that believes the only effective policing is repressive policing.

Is there a correlation there between police inaction and more shootings in East New York? Almost certainly. But we can deal with that without going back to blanket (and now illegal) police of massive stops and frisks.

People feel safe when they see police and normal life functions. Police presence is key. Police getting out of their car is key. Police need to know the people -- good and bad -- in their area. Police need to stay in one area for a long time so that knowledge isn't wasted. But 600,000 stops a year? That's too many. And zero? That's too few. But somewhere in between the two -- and toward the lower end -- it's going to be just right.

Good new is not new, is it?