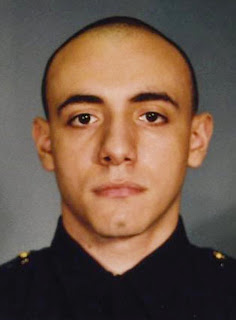 Melvin Santiago, a rookie Jersey City cop was killed -- ambushed while sill inside his police car -- responding to a 4am call for an armed robbery.

Sometimes, after a cop is killed, (just between you and me) I think, "man, that cop messed up" (knowing full well that we all mess up some time). Other times I think, "Man, maybe the cop shouldn't have been so eager to search that car, fishing to find drugs. If it weren't for the war on drugs, that officer would still be alive."

Other times, like in this case, I just get sad and think, "There but for the grace of God go I."

Officer Santiago gets a call at 4am for a robbery. What cop hasn't? He responds to the scene and is immediately shot and killed.

The killer, a suspect in a previous homicide and with many previous arrests, first cut and took a gun from an armed Walgreens' security guard. Apparently he then tried to kill the guard (but was perhaps foiled by the gun's safety). He said, "I killed your security guard" and told a customer to watch the news because he was “going to be famous.”

So instead of leaving, he lingers for four very long minutes, waiting for the cops to show up. When the first police car pulls up, he shoots and kills Santiago: "Bullets flew through the cruiser's windshield, 13 in all. The suspect was shot multiple times, and officers slapped handcuffs on him."

This horrible story has been well reported, so I had nothing to add.

But now we've got the words of the killer's horrible wife. See the problem, according to her, wasn't that her husband is a cold-blooded killer. No. The problem is that he didn't kill more cops. Because apparently, in her twisted world view, a man has a right to go out robbing and killing without society being all judgmental.

She says, in what may be the most twisted attempt for sympathy ever:

Meanwhile, the mother of the Santiago poignantly stated the obvious:


[The killer] is a piece of shit. My son was 23 years old and he was a good boy, and he didn’t deserve to get a bullet in his head for no reason. For just doing his job. It was his dream and ... he didn’t have to die like that. All because somebody wanted to be famous.

That woman is really sick. Killing more people? Sounds like a serial killer to me.

From an email sent to me: This video has been pulled from news 12 site because of reporters comments about neighborhood. We don't all police in Mayberry where people sit around discussing the non aggression principle.