The medical examiner's office says Eric Garner was murdered. To wit: "compression of neck (chokehold), compression of chest and prone positioning during physical restraint by police."

His death has been ruled a homicide, and presumably we're going to be in for a Staten Island trial with Daniel Pantaleo and perhaps other police officers as defendants. 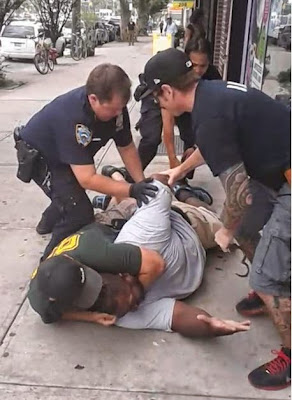 I don't think he meant to kill him but did use excess force and probably the police officer with all the viral videos and news media will probably be fired. Unfortunately there will be 3 victims in this unfortunate accident.

I predict that it will be no-billed -- or whatever the NYS term is for no indictment from the GJ.

Could be wrong. Hope I am wrong. I know that many policemen are following this case closely and I want them to get the correct message so that they are more motivated to de-escalate, and not to perpetuate the increasingly popular arrest for resisting arrest trick.

Did Pantaleo serve his country overseas?

I'd sure like to see the full ME report on this. The "chokehold" lasted only 15 seconds, caused no damage, and the deceased can be heard speaking after the officer releases the hold. But they can pinpoint that as definitive factor on a cardiac arrest involving middle aged obese asthmatic with heart disease? I'm thinking the officer's defense team is going to have an easy time finding their own doctor to find some issues with this report.

I too would like to see the full ME report. But the ME said there was a chokehold, and it contributed to his death. Who am I to second-guess the good doctor's verdict?

And from what I read the chokehold *did* cause damage, according to the autopsy.

Even just as a contributing factor, well, you use a forbidden move and somebody dies? Well that's why it's forbidden, and you're in big trouble.

Not to speculate, but sometimes people go have a strong surge of adrinnalin and because of that things can get out of control. I'm sure his compromised body health didn't help the situation.

Who am I to second-guess the good doctor's verdict?

A couple years ago we sent a guy to the ER who'd taken a header off of his trailer porch and fractured his skull pretty badly. Older guy, alcoholic, pretty obviously drunk and when he fell didn't get his hands down to break his fall or anything. And there was no doubt it was a fall. The guy lived along, neighbors were nearby and didn't hear an altercation, no splatter or weapons, etc etc. The doc at the hospital though got the family wound up by absolutely insisting the guy had been attacked because there was no way the skull fracture had been caused by a fall. It was a real pain in the ass and made me leery of the certainty some these docs have when ascertaining the cause of an injury.

Even just as a contributing factor, well, you use a forbidden move and somebody dies? Well that's why it's forbidden, and you're in big trouble.

Exactly. And even if it turns out that there's a good chance it wasn't a factor, you've already screwed yourself by getting filmed doing something that's prohibited. That guy might have died anyways but now they've got your dumb ass to hang out to dry.

I share your skepticism in general, but I suspect there's a pretty big difference in this case and the case of Trailor Joe Drinkalot. Some Doc who watches too much TV versus the Chief M.E. of NYC? I like to think the latter is a professional who does a honest and thorough job.

"That guy might have died anyways but now they've got your dumb ass to hang out to dry." Ain't that the truth! (But this wasn't the first time that this cop has gotten in the jackpot for excessive force.)