Bang bang, they shoot you down

The data on police-involved shootings are notoriously bad (that's a link to Jon Stewart worth clicking on!). And yet, at least we kind of know which data are missing. That makes the data not as bad as you might think. At least when it comes to police-involved justifiable homicides (for shootings, we don't know. But if you multiply homicides by two or three, you'll probably be close enough).

Now I've compiled the UCR data on justifiable police homicides from 1998 to 2012. And the data are not complete. Some cities send data. Some don't. Others send a few years... and then decide they have better things to do.

But of the 70 biggest cities in the US, only about 15 jumped out to me as horribly lacking in data. And if you take the 45 cities for which the data is probably good enough, which cities have the highest rate of police-involved homicides?

New York isn't close to the top. (The UCR data from New York actually are not good -- but the NYPD actually provides excellent data on shootings, but for some reason they just don't bother reporting to the UCR.) But if one were to compile the data from the UCR and the NYPD (as I did) one would find an average of 12.2 annual police-involved shooting deaths. Let's round up to 13, for the few cases of non-shooting police-involved homicides. That's an annual rate of about 0.16, which is low. Very low. It puts New York 50th on the list of the 55 largest cites in the US (for which there is probably good data). New York's rate is one-sixth the rate in Baltimore City, for instance.

Number one in the US -- the city with the highest rate of police-involved homicides -- is Riverside! Riverside? Where the hell is Riverside? Is that even a city? I had to look it up. Yes, it is a city. Also a county. In California. But since other cities in Riverside County report their own data, I have to assume that "Riverside" is just the city of Riverside.

The top 25 cities for justifiable police-involved homicides from 1998-2012 -- and this is only based on data police provide to the UCR -- but if you do rank high on this list, you probably do provide accurate numbers. It's also only for the most populous 70 cities in America. Homicide numbers are total for 15 years. The rate is annual, per 100,000 residents. And there may be errors.

Also keep in mind this doesn't take the city's crime rate into account. Sure, Baltimore cops shoot a lot of people. But a lot of criminals in Baltimore need to be shot! Baltimorians shoot each other even more. So while the BPD does indeed kill citizens twice as often as say, police in Chicago, there are more situations, per capita, in Baltimore (and Newark and St. Louis) where police need to shoot. So more noteworthy are lower-crime cities that have a lot of police-involved shootings. I don't know what to say about Riverside or Sacramento or Las Vegas, Nevada. And why are six of the cities in California? 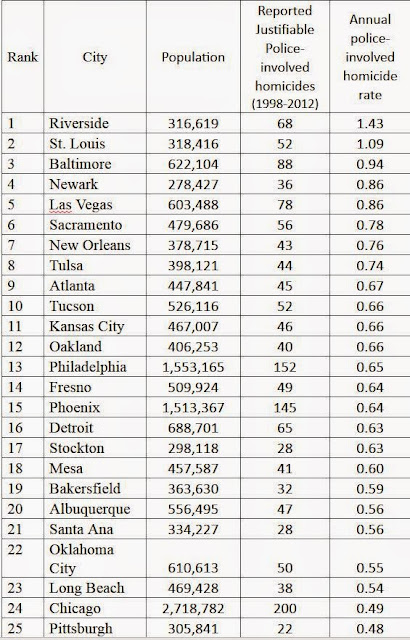 Yes Riverside is a city. There's even a branch of the University of California there, often called UCR.

Ha! That's pretty good. It's not often you get to combine police posts and nerdy stats jokes!