The city of Riverside, California appears to be, by far, the city in which police are most likely to commit justifiable homicide. I listed a rough rank order of cities in my previous post. Riverside is almost 50 percent higher than the next highest cities, St. Louis and Baltimore. (Even more so if one takes into account Riverside's population gains over the past decade.)

Riverside police kill an average of 4.5 people a year. This is very high for a city with about 300,000 people. New York police kill about 13 people per year. But NYC has 8 million friggin' people!

Other cities with a lot of police-involved homicides, like St. Louis and Baltimore, have a lot of crime. Not Riverside. Over the past decade (2003-2012) there have been 14.6 homicides per year in Riverside. This is on par with about the national average of 5 per 100,000. St. Louis, by comparison, about the same size as Riverside, sees about 126 murders annually. Baltimore, twice as large, has averaged 248 murders. Baltimore and St. Louis have a lot of murders. Since there are more murderers, one would expect police to shoot more of them.

I applied PIHN to the 10 cities with the highest rate of justifiable police-involved homicides in America and also to the 10 largest American cities. First the cities in which police kill a lot of people, per capita. 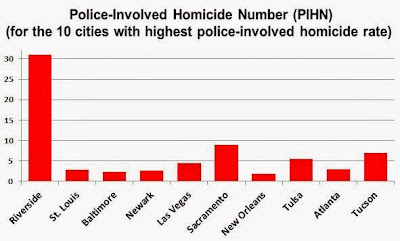 Notice the cities ranked 2, 3, 4 (St. Louis, Baltimore, and Newark) in police-involved homicides drop way down if one takes the homicide rate into consideration.

Here are the 10 biggest cities. New York, even with a low crime rate, has a low PIHN. Not surprising to me, because the NYPD is very restrained in shooting (despite what you may read). And there's a general clustering between 2 and 4 for the top five. 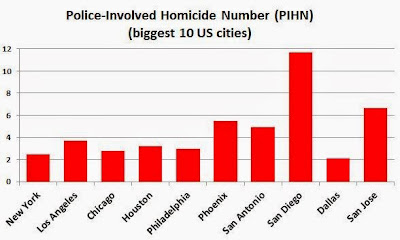 Among the 20 cities I looked at, there's a cluster of PIHNs between 2 and 3: Philadelphia, Atlanta, Chicago, St. Louis, Newark, New York, Baltimore, Dallas, and New Orleans. There's variance, to be sure, but they're all kind of in the same ballpark.

And then you go west of the Mississippi and the PIHNs skyrocket, particularly in California. Tulsa's PIHN is 5.4. Sacramento is 8.9. And Riverside, California? Riverside's PIHN is 31.1! That's crazy high. Here are the highest PIHNs: 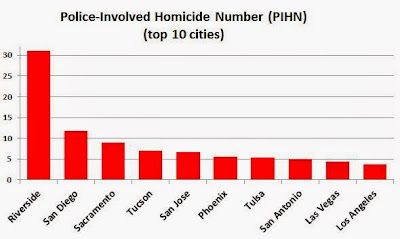 (Keep in mind this top-ten list comes only from the 20 cities I calculated, which are the 10 largest cities and the 10 cities with the highest police-involved homicide rate, based on URC data.)

Riverside, California. What is up with Riverside?

[You too can calculate PIHN! Divide the police-involved homicide rate or number by the average overall homicide rate or number. I used 2003-2012 homicide data from city-data). And then multiply by 100 to get a PIHN greater than 1. Or I'll do it for you if you do some of the grunt work. Go to city-data, enter the city of your choice, scroll down to crime, add up the homicides numbers from 2003 to 2012.]

[Data for San Antonio police-involved homicides are averaged from just the past six year, since they didn't report to the UCR before then.]

Email ThisBlogThis!Share to TwitterShare to FacebookShare to Pinterest
Labels: PIHN, police-involved shooting, use of force

These posts are fantastic. It'd be nice to see them spread around among the commentariat.

Thanks. Me, too. But they haven't really been noticed at all yet.

I live in Riverside and I honestly am not at all surprised to see this... The police here are not Cops, they are the worst kind of criminals, hiding behind a badge, uniform, squad car and gun. Wolves in sheep's clothing. Evil men, (and women), who do not come close to being the "good guy" who "serves and protects". They are bad people who harass, violate rights and privacy, abuse their authority, profile all, treat citizens w/disrespect, treat citizens like they are guilty until proven innocent, they act as if ordinary people are below them and have no rights, they're heartless, unjust, unfair, criminals of the worst kind who laugh in your face as they tell you that you have no rights no matter what the law says on paper and books. I used to have a lot of respect for the officers of the law here in Riverside,.. But, I was naive and unaware of what they truly are and what they truly stand for. That was before I became known to them and harassed every single day by them. I've never been arrested, never took part in criminal activities of any kind, but I am, according to the PIGS Riverside sadly has made the members of the RPD, I am GUILTY BY ASSOCIATION. I have a friend who is homeless who I, often enough, let shower and/or eat, and occasionally let spend a cold night on my warm couch inside my home. I am unaware of where he goes or what he does while he is not at my house, (which is most of the time and really none of my business). He was obscounding and hadn't checked in with his P.O., so, after getting my address from someone who knew it was posssible that they may run into him here, the RPD came to my home looking for him. Wouldn't you know that he just so happened to show up less than 10 minutes before asking to take a quick shower.. Long story short, that was enough reason for the RPD to drive by my home 2-5 times a night for the next 5 1/2 months, spotlighting my home, harassing myself, my Mother, and my Son... I never ever thought that I was going to have to explain to my 9yr. old son what a dirty cop was. And I thank the Riverside Police Dept. so very much for teaching my son that you can't trust a police officer, can't ask for their help cuz they're the harassing bad guy rather than the good guy like I was always taught, and for teaching my son that having such a significant job that holds so much responsibility, respect, and seriousness which so many people depend on and trust in and believe in is really nothing to take serious, and can be treated as a messed up joke.... Really, bunch of real swell guys!!!.. Oh yeah, and great ways of going about wasting good taxpayers money driving by my house harassing me when there's so many real criminals out there robbing, hurting, breaking, murdering, baby-raping, lying, thieving, etc., etc., etc.