Why Hassaum McFarlan Matters (or what liberals don't understand)

Imagine you're a New York City Police Officer. You take pride in your job and serving the city. You work hard. You play by the rules. You also feel you don't get enough respect for what you do. And that disrespect comes right from the top.

De Blasio gets elected mayor. You believe, perhaps correctly, that the mayor neither understands nor appreciates what you do. Suddenly police bugaboo Al Sharpton becomes a trusted aide. Whatever you think of the reality of Sharpton, the symbolism of giving him a major say in police policy is painful to most police officers. The New York Times says: "Mr. Sharpton... is now a highly influential figure at City Hall."

Anyway, you do like your job. You love the people you work with. But anti-police liberals -- those who have no understanding of your job and seem to criticize everything you do or don't do -- piss you off.

If you're a cop, you're not getting rich. You get by on $45,000 to $70,000 (perhaps $10,000 more with overtime). NYPD Captains (a rank above sergeant and lieutenant) make less than Noerdlinger. Captains can have hundreds of disgruntled officers and 100,000 concerned citizens to manage and keep satisfied. And these are people you can neither fire nor deport. On top of that, you've also got the top brass breathing down your neck, busting your chops at compstat. The chief of patrol makes about $200,000, I think (correct me if I'm wrong). For what it's worth, my salary as an associate professor (10 years on the job) is about $85,000.

And do keep in mind this is a city where apartments rent for $2,000 to $3,000 and the average (median) home sells for over $1,000,000. It's not a cheap place to live. But this really isn't mostly about money. It's about job professionalism and integrity. It's about messages from the top.

The mayor hires Rachel Noerdlinger to serve as chief of staff to his wife, Chirlane McCray. You even noticed that one because Noerdlinger was formerly Sharpton’s spokesperson. But it became news recently when Noerdlinger became the story became of her boyfriend .

Noerdlinger lives in Jersey (she got a waiver for that). Noerdlinger also gets paid $170,000. That would pay for two college professor, two police officers, or 1.5 sanitation workers (you can pick whichever you think is most needed).

Here's the first part of the problem. Noerdlinger's live-in boyfriend, Hassaun McFarlan, was convicted of manslaughter as a teenager and does not like cops, to put it mildly. He also doesn't seem to speak well of women, either. From the Times: "The mayor has defended Ms. Noerdlinger, saying she should not be judged by the behavior of a companion." OK. Fair enough. Maybe we shouldn't judge. But sometimes you need to: "two of McFarlan’s five arrests on charges ranging from driving on a suspended license to drug trafficking took place while he was dating Rachel Noerdlinger."

Let's get real. This isn't a civil service or union job. This isn't a question of free speech. This is a question of bad judgement by a woman in a powerful discretionary patronage job. Standards should be higher, not lower. Messages from the top do matter. What if McFarlan wrote about Jews like he wrote about cops? What if McFarlan stereotyped women like he actually did stereotype, er, women? (Actually, that he's getting a pass on that is kind of surprising). If it were almost anybody but cops complaining, Noerdlinger would be out. There were be platitudes about the tapestry of New York City. You'd hear about there being no place for hate in this beautiful diverse city. Now you may have no problem with all this being considered no big deal by the administration, but please understand why cops do.

I would argue that a trusted aide should be trusted to have, if nothing else, good judgement, it's not just a question of what her boyfriend said or said. It's also that Noerdlinger herself didn't mention her living arrangement, as required in the hiring process:


She had failed to disclose on a background questionnaire that she lived with a boyfriend, Hassaun McFarlan, who had an extensive criminal record. False or misleading statements on such a form can result in termination or prosecution.

...Still, it remained unclear why Ms. Noerdlinger had chosen to inform the mayor’s aides of her living arrangement, but not officials at the city’s Department of Investigation, which conducts formal reviews of high-ranking City Hall appointees.

But apparently the administration sees no problem here Nordlinger didn't "intend to deceive" the mayor about her domestic status. Or do honesty and ethical inquiries not apply at the top (is that a silly question to even ask)? You can be damned sure a cop in controversy would be thrown under a bus for such a violation. And perhaps rightfully so.


The standards that apply to hiring police officers should apply equally to hiring high ranking, influential staff members. If it is found that she committed a lie of omission during the investigation, then she should be fired. 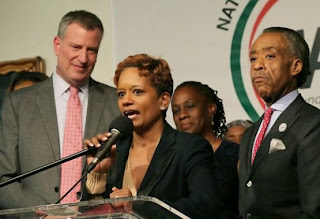 If you want to read more, you could read this and this.