The major final ordered the police commissioner to order the department to follow New York State and not arrest people for small-scale possession of marijuana. This has actually been the law since 1977. But the NYPD has subverted the law, especially in the past decade, by arresting people anyway. And we're talking tens of thousand of people per year. And yes, of course it's racial unfair (since whites smoke just as much if not more weed than blacks, but don't get arrested for it).

The Times account is here. The Post's is here.

The union reps issued their usual tone-deaf disbelief. Which is their right, I suppose, but it would be better if the union reps kept to things like pay and working conditions rather than promoting their uniquely conservative ideological world view. From the SBA head; "People are asking: 'What is going on? Is this department losing its mind? Has the city lost its mind?'"
Answer: A liberal mayor wants cops to stop arresting minorities when the crime is marijuana posession.

And besides, most of you guys didn't vote for the mayor. And not just because you hate him, but because you don't live in the city. But the citizens of New York City did elected the mayor. And so de Blasio does, to a great extent, actually reflect the represented will of the people. And besides not arresting people for small-scale possession of marijuana has been the law since friggin' 1977! It's just that since the late 1990's, police officers just decided to subvert the law.

So what does this mean? Well, it could mean a lot fewer arrests for police officers. That's not bad if you're a taxpayer or a fan of the bud. But what if anything can police do compensate for the lost overtime? I don't know.

Here's the thing: cops do not and did not actually give a shit about marijuana any more than than they do about jaywalking. Cops wanted to make arrests. And stopping people and finding weed because a way to make arrests. And we're talking a good chunk (like 1 in 7) of all arrests in New York City. Up to 50,000 a year! So we'll see if something else takes the place for such discretionary arrests. But probably not.

This could actually be a pretty major shift in police culture. But it has been argued that marijuana arrests became a thing in New York because of arrest pressure combined with the drop in crime. So will something else because the new reason to arrest when there's no other good reason to? I hope not. Probably, in the long run, the past 20 years of massive marijuana arrests will be seen as the aberration. Just another crazy bit of New York City history. Like the 2nd Avenue L, the New York Giants (baseball), and the 6-shot revolver. 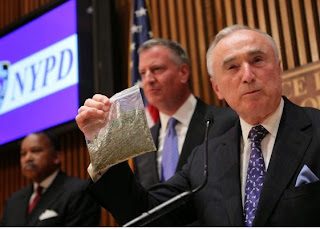 If my union rep pushed back against something like this I'd have a powerful urge to kick him in the nuts. I ignore weed all the time because come on, I'm seriously going to have to write a report and book evidence on a victimless misdemeanor? Screw that.

Well said. That would be (and was) my attitude.

But there have been thirty- and forty-fucking-thousand of these arrests a year in New York.

Our society used to be much less formal. If someone was being obnoxious or foulmouthed, then some shop owner or civilian or even a cop would simply tell them to quiet down, quit acting stupid, and leave. These informal boundaries encouraged some basic level of propriety and common courtesy in people. Our civilization has become hyper-disintegrated along class and economic lines since suburbia and malls became common. Legislators try to bridge the gap by making things much more formal, and much more illegal and technical. The immigrants from the rural south have not adapted well to this, and the commercial culture of it amounts to thousands of hours of watching and listening to people be fouler and stupider than they would otherwise be. This culture is commercial. Post-indudstrial consumer culture has a higher defect rate.

Re Cops, Voting, and DeBlasio:
Last week, the anti-Dalai Lama protestors are making a huge racket with their drums. They’d done the same thing for hours the previous day. So I go down to the street. Several cops are standing around in front of the Beacon Theater, presumably to protect the Dalai Lama. I ask if anything can be done about the noise. A guy in plain clothes who looks like a younger William H. Macy explains that it's a free speech issue -- "as long as they don't have amplified sound. . . "

Then, talking to two uniformed cops, he adds something about DeBlasio. I catch the last part. "Only 600,000 people out of 8 million New Yorkers voted for him."

But if those are the rules on free speech, I say, what could DeBlasio do?
"Giuliani woulda did something," he says.