How much would they have pay you to do this? 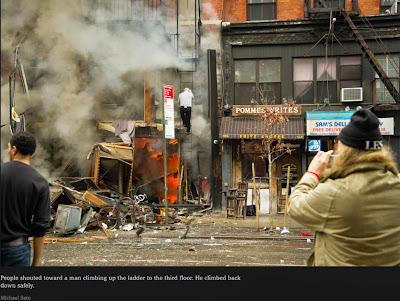 Civil servants too often get disparaged. But that man on the ladder is a New York City civil servant and he is climbing up, not down. I'm no longer a civil servant, but this makes me proud just to be fellow worker for the City of New York.

Here's a video of climbing down here.

Previously unidentified, he is Bronx Firefighter Mike Shepherd. He was off-duty and just happened to be nearby. Talk about being a first responder! While other people took pictures of an exploding building, he climbed into the flames to look for and save people!

This is what I mean about the job being different if you walk into danger. His base salary is about $77,000. How much would they have to pay you to think and react this way?

According to the Times:

Mr. Shepherd went up the fire escape and climbed floor by floor. At the building’s second floor, the floor was buckling. People on the ground began yelling for him to get down. He continued his ascent to the fourth floor, yelling, "Anyone here, anyone here?"

And my eyes get a teary when I read this about one of the presumed dead:

A day after the explosion, Hyeonil Kim, 59, the owner of Sushi Park, said the police and rescue workers were still not able to locate Moises Ismael Locón Yac, 27, a member of his restaurant staff. Of the 15 employees at work on the day of the blast, three were injured, according to Mr. Kim. Of those people, two remain hospitalized; one, a Nepalese man, was injured badly, he said. Mr. Kim described Mr. Locón as “earnest” and good at his job.

“Everything I lost is just lost, nothing I can do about it,” he said. “But this friend —” Mr. Kim stopped speaking, overcome by sobs.

Locón was from Guatemala and lived in Queens, not far from me.

Now I'm not saying you should climb into a burning building (and don't do it if you're wearing polyester). Just be happy others will do it for you!

[Also, I don't mean to pick on that guy taking a picture. He actually did help somebody!]