BPD says they can't make a wagon available to reporters? (Not the wagon but any wagon?) I hope this baby has been retired, but you never know. What you can't see are the middle-facing bench seats fitted with seat belts. 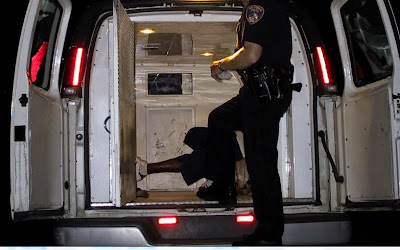 Officers arrest somebody and call for a wagon (90 or 91). Sector cars in Baltimore City are not "cage cars" so you can't transport prisoners in them. The wagon (perhaps driven by a paunchy officer with a few decades on the job) shows up. You give your prisoner to the wagonman (or woman). If you used metal cuffs (as you would unless you planned on making an arrest and brought plastic flex cuffs), you get your cuffs back. The prisoner gets re-cuffed and re-searched by the wagonman taking custody. Every time custody of a prisoner changes hands, the prisoner is searched.

The prisoner is then put in the wagon, selt-belted in, and taken to the district for questioning or to (state-run) central booking. Other prisoners may be picked up en-route by the wagon, as needed. On all transports, mileage of the vehicle is called into KGA at the start and end of trip (with a time stamp given by dispatch).

If the suspect is injured, you would call for an ambo to take the prisoner to the hospital. Central booking won't take people in need of medical care. If I thought a prisoner wasn't really hurt but said they wanted to go to the hospital (happens a lot), I would informs them of how we'd both be stuck at Hopkins Hospital for hours and how this would only delay their processing and eventual release from CBIF (all of which is true).

There is no "fast track" at the hospital for police and their prisoners. Often they'd say, "fuck it; take me to jail." Sometimes I would give a little primer about what not to say to the intake person at CBIF ("my head hurts" "my chest hurts") because CBIF could decide not accept a person without a doctor's note. You certain might negotiate their need for hospital attention (read: sitting in the ER waiting room for hours for a 5-minute cursory exam). But if a prisoners insisted on going to a hospital, you don't refuse medical treatment. You take him there. In the end it was their call.

[Apparently there's now a metal barrier in the middle of the van.]

Interesting. Here in Peoria, the squads are equipped for transport. But,for efficiency, city officers call for a wagon (A29 or maybe F29 during peak hours) to pick up arrestees. The county does the same thing.

If they got rid of the wagons, do you think officers would be more selective about arrests? I have wondered about this. Maybe some officers would milk it to stay out of service, but I would think that would draw the attention of sergeants (and the officers forced to take their calls) really quickly.

I don't think it would change arrests.

Cops hate cage cars because you can't move the seats back or recline them.