Maybe you were too busy blocking traffic into the city to notice, but this past weekend 32 people were shot in Baltimore. Nine were killed. 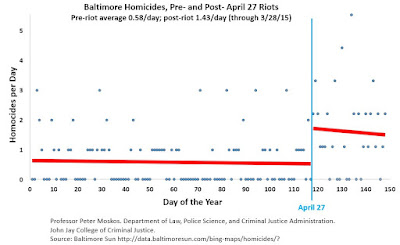 Meanwhile, from April 25 to May 23, this past month, 122 people were shot or killed in Mobtown. Last year the comparable figure was 52.

Where are these shootings happening? The Central District was basically steady. In the Northern District, shootings were actually down to two, from four. Shootings in the Southeast did increase, but just to eight. Not much up in the Southwest.

The Northwestern District? Shootings were up to 13 in the past 28 days. That's compared to 1 last year.

The Wild West? There were 33 shootings this year (compared to 10 last year). I don't know what the population of the Western is, but it's probably even smaller than the Eastern.

In my beloved "Historic" Eastern District? 22 shootings and homicides in 28 days. Last year there were 7. (For what it's worth, homicides in the Eastern actually were lower than last year, 3 versus 4!)

Keep in mind that these victims (and shooters) come mostly from the population of 15- to 35- year-old black men.

Now this is just one month, mind you. Twenty-eight days. And we're talking about a "Formstone figure" (OK, I just made that one up) of roughly 1 out of every 250 young black men being shot. In one month! Chew on that bony Lake Trout for a while. But this ain't no bull and oyster roast.


[Maybe I did something wrong with my math? Let me know.]

I don't think that the police are the biggest problem, but they are the most fixable problem. In the Freddie Gray case, Mosby fixed it by bringing the charges. It won't bother me if several of the officers are not convicted. Maybe, when the facts come out none should be. However, I am glad the justice system is now looking at questions like exactly how Freddie came to be on the ground, whether his neck started breaking before he got put in the van, whether the drugs were planted on Freddie in March (the bail bondsman allegedly says that Freddie told him they were planted, but I am sure some defendants say that even when it is not true), how Freddie came to have that knife, whether that knife was probable cause for an arrest, whether fraudulent police reports were written and/or tacitly approved, and so on.

In so many cases, these kinds of issues don't get litigated the way they should be.

None of this is going to make a dent in the race / poverty issues in America. Those are more Bernie Sanders type issues than Marilyn Mosby type issues.

whether the drugs were planted on Freddie in March

Gray had over a dozen dope charges on his record. Nobody's risking jail and their career to plant drugs on that guy, especially in an area where you can't swing a dead cat without hitting someone with drugs on their person.

Why do you think there is a real risk, Campbell?

Because if somebody films you planting drugs, you go to jail or get fired. It didn't happen when I was of the job. And it hasn't changed.

Campbell's point does highlight what can be so frustrating about your comments. (Along with your fixation on cops planting things on suspects; this is a post about black men being shot too much.)

You have no idea how easy it is to make a drug arrest in that neighborhood. No idea. You would laugh if you saw how easy it is. Also, gray was a hustler, a user and occasional dealer. Of course he often had drugs on him.

You have no knowledge of the workings of the streets of Baltimore. And you're talking to people who are or have been there every goddmamn day. It's like a little leaguer trying to tell Phil Niekro about throwing a nuckleball. You might actually be right. Who knows? But you're still out of your league telling cops about what happens on their job.

I've worked with these cops. I talk to many cops who police these streets. I've spoken to people who knew Freddie and seen him arrested enough times to know his date of birth. These are people who know the cops being charged. I know some of the cops charged. It doesn't mean I know for sure what happening (nobody I've even spoken to knows), but I do have insight, sources, and experience that hopefully mean something. When I read some of your comments, I feel something between frustration and being insulted.

And as a favor to me, please stop bringing up any reference to cops planting things on suspects. It bugs me. Please, unless the post is about "cops planting evidence" just don't go there.

No insults have been intended. I have much more respect for you than I suspect that you have for me. I have great interest in how the Fourth Amendment limits what a policeman can permissibly do, but I don't equate that with "telling a policeman how to do his job." Certainly on this thread I have not tried to tell any policemen how to do their jobs, but merely tried explain how a citizen could "prioritize" police problems over other problems that are bigger than problems associated with bad policing. The last paragraph of your post seemed to be snarkily inquisitive about this issue.

There are people out on the internet who do insult you. I am not one of them.

Campbell's comment is hilarious and spot on. Planting drugs or guns is one type of police misconduct that laypersons seem think is prevalent when in fact it isn't at all. Another big one is beating confessions out of people. That used to happen back in the day, but I think the practice is virtually nonexistent now. Other forms of police misconduct are, sadly, less rare. "Testilying", stops and searches without justification, physical brutality (like the "running tax", which one of my co-workers openly defended during an in-service training session) -- those are real problems. Given what people see on TV and in movies, I can't blame non-police officers for having a warped sense of how common various types of misconduct are. At least David is receptive to officers telling him what is or isn't accurate based on their experience. And he does offer some helpful insights on the Fourth Amendment -- especially for a patent lawyer!