Michael Wood Jr. has made some waves by tweeting about things he saw as a Baltimore cop.

[To get up to speed, single best thing to read now is the Balko interview.] 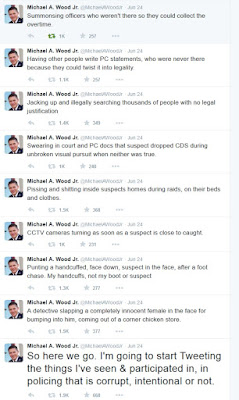 Honestly, I don't doubt what Wood says. I am curious if all the bad he saw came from his time in narcotics. And for better or for worse, he wasn't in narcotics long. I don't think he made an arrest since 2009. There has been lots of time to bring up these issues. Lots of time to go to IAD. In fact, he still could. But anyway...

I never worked a specialized unit. I didn't want to. I didn't like they way the worked. (I also wasn't there long enough anyway to get out of patrol.) I saw the drug squads tear up homes during raids. (I was sometimes the lone "uniform" out back.) It was immoral and ugly. Worst of all, it was legal.

End the drug war and 80 percent of police problems vanish.

But I'm curious, if Wood was a sergeant, did this stuff happen under his command? Because then it's also on him. But all in all, I have no reason not to take him at his word:

I will admit to some self interest in coming forward. I’d like to part of the solution. I woke up to this, and I think I can be a bridge. I speak the language cops speak. If there’s some task force or policing reform committee I can serve on, I’d love to do that.

Other than that, I think we just need more conversation.

Unlike Wood, I never had a "come to Jesus" moment working as a cop. The world -- and policing -- is filled with a lot of gray. I already knew the war on drugs was doomed. (What I learned as a cop on the front line was how that failure worked out on the front line.) I suppose I went in a bit more world weary and cynical than the average cop. I was older (29) than the average rookie. I lived in the city. I did not have a military us versus them attitude. I was college educated. Well traveled. I spent a lot of time with the police in Amsterdam (on and off from 1996 to 1999). So I had a certain perspective as to what I was seeing and doing on the job. I was not completely unfamiliar with the ghetto, black people, or urban life in general. I was not afraid.

I am afraid that lost in the sensationalism of a cop "telling all" will be the subtlety and nuance of what Wood is saying. It would be unfortunate were this just filed away as ammo in the "cops are bad" camp. I know -- as I presume Wood does -- too many cops who do care, do have empathy, and do work very hard to help people. I also know a lot of cops who maybe stopped caring, but still do a good job. And, sure I'm all for societal justice, but lofty ideals don't tell police what to do in neighborhoods with these kinds of problems!

In a very long radio interview Wood mentions something which deserves highlighting:

This job is largely impossible.

Here's an interview of Wood by Radley Balko in the Washington Post:

What we’re doing to people to fight the drug war is insane. And the cops who do narcotics work — who really want to and enjoy the drug stuff — they’re just the worst. It’s completely dehumanizing. It strips you of your empathy.

I found his take on veterans as cops (he is one) interesting:

But when it comes to former military joining law enforcement, I’m in the camp that says they’re going to be better when it comes to shootings and using force. Bad police shootings are almost always the result of a cop being afraid.... The military strips you of fear. Here’s the thing: There’s nothing brave or heroic about shooting Tamir Rice the second you pull up to the scene. You know what is heroic? Approaching the young kid with the gun. Putting yourself at risk by waiting a few seconds to be sure that the kid really is a threat, that the gun is a real gun. The hero is the cop who hesitates to pull the trigger.

I've often said it would be nice if we could talk about some of the important issues before somebody dies. Maybe Wood is giving us that opportunity.

[Though he's wrong about the baton.]

Woods has some important things to say and should be listened to. But you're right, Peter. If he was a sergeant, he should have been intervening. His hands are dirty too. Hell, non-supervisory personnel should be stopping officers who are out of line too, with physical force if necessary.

I believe in independent oversight of police (Ombudsman, IG's, etc), but on the street, police need to start policing themselves before things get even worse. With more and more incidents being caught on tape, if people don't see the police being held accountable (or holding themselves accountable) people are going to start holding law enforcement accountable themselves. Riots are unfocused expressions or rage. What will happen if the rage becomes more focused. Impunity tends to radicalize people.

Anyone who speaks to Radley Balko is a tool. But actually, Radley Balko wouldn't speak to anyone who wasn't going to try and make cops look like goons. When's the last time he spoke to you, PM? Chief Ed Flynn? Kelly? Bratton? Or even pro-LE academics like David Klinger or Paul Cassell?

The guy is a doctoral candidate. We all know what the trendy line is in academia these days (at least I do, since I have my degree). And this guy knows how to sell it.

"The military strips you of fear."

If this guy was "stripped of fear" then he's an absolute idiot. There are plenty of things that police and people in general should be rationally afraid of. The veterans I know, who were honest, were pretty blunt about their fears and how they dealt with them. The liars, whom apparently include this guy, claim to be fearless robots.

I guess BPD gets what they pay for at less than 40k a year.

I don't think Loehmann is a good exemplar od non-military-vet police officers. There was a ridiculous amount of indications that he never should have been hired in the first place.

I interpreted the "stripped of fear" comment as to mean that it strips of that panicky decision-making process, not that it makes you some robot who is unafraid.