Porter's trial ended on Dec 16 with a hung jury.

The next trial, Caesar Goodson the wagon driver, is scheduled for Jan. 6, 2016. Goodson is charged with second-degree depraved-heart murder, manslaughter, second-degree assault, two counts of vehicular manslaughter and misconduct in office.

Officers Edward Nero and Garrett Miller are charged with second-degree assault and misconduct in office. Miller's trial is scheduled for Feb. 9. Nero's on Feb. 22. 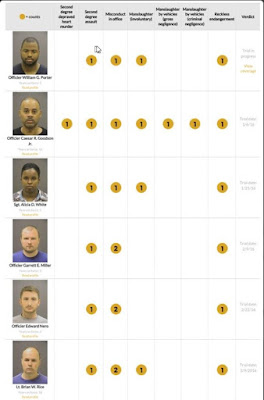 (Definitions of those charges.)

Email ThisBlogThis!Share to TwitterShare to FacebookShare to Pinterest
Labels: Baltimore 6

Prof, can you remind us of the job status of these cops? Ie, suspended with/out pay, modified, fired, etc? And is that status required by law/contract, or is it usual/unusual for this sort of case?

I'm not 100% certain, but I assume suspended with pay.

2 questions: Any chance that there will be a breakdown of the hung jury or is there a gag order? Does Porter get back pay if acquitted of the felony counts?

Also, a comment: in my opinion the strongest piece of reasonable doubt the defense presented (not counting the part where some people think it was wrong to bring charges at all) was the timing of the injury. In a retrial, I think the prosecution benefits by having heard the Defense's expert since I assume the prosecution's theory was available already but not vice-versa. Is that correct or did the defense have to disclose prior to testimony?