Have you heard the news? There's nothing new under the sun.

"Today a policeman doesn't know where he stands. He has lost the ball. He has become defensive and he doesn't do a good job when he is on the defensive."
...
"A cop will give his life to catch a burglar, holdup man, or a purse snatcher, but he'll wait for it to happen before he reacts."
...
"So we don't look for guns anymore. Within the past year I've made one arrest. All I do now is issue tickets."
...
"It's a lousy job when you can't be a cop and do your work."
...
Police claim [black] groups are encouraging crime by offering blanket support to [black] felons who bring civil rights charges against arresting officers.
...
That the job does not have the attraction it once had is evident from the department's recruitment problems. For the last eight years the personnel department has been unable to fill recruitment quotas. 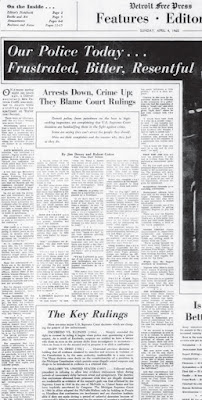 "There is little question that when police illegality becomes an accepted everyday practice, individual liberty is threatened and cynical contempt for law in engendered in the police, the law violator and the law abider alike."

(Of course, it's worth pointing out that crime really was skyrocketing, and Detroit never recovered. Who knows? Maybe judicial changes were partially to blame.)

[Thanks to Alex Elkins for the article, and also these Detroit murder numbers:]

Murder jumped by 47% between 1964 and 1965. Those numbers rival the increase in murder that some cities experienced in 2015; the national increase was around 15%.


"Nonsensically, as the crime rate dropped there was an increase in police budgets and use of force."
...
"1,500 people die annually from law enforcement related deaths. Americans are nine times more likely to be killed by a police officer than a terrorist."


Why the truth is so hard swallow... no wonder people would rather enjoy fairy tales and believe in heavens... smh

I think I used to see Professor Foote at the law school even though he was retired already. Your post kind of freaked me out because I couldn't imagine that he had moved to Pennsylvannia and started teaching again.

The change and the way things are.