This picture of adults overdosing when a kid in their car has been making the rounds since police in East Liverpool, Ohio, posted it on facebook. 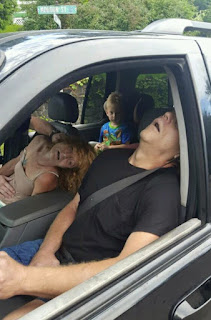 We are well aware that some may be offended by these images and for that we are truly sorry, but it is time that the non-drug-using public sees what we are now dealing with on a daily basis. The poison known as heroin has taken a strong grip on many communities, not just ours. The difference is we are willing to fight this problem until it's gone and if that means we offend a few people along the way we are prepared to deal with that.

Normally I wouldn't consider this event or picture blog-worthy. But I just heard an interesting interview on All Things Considered with the East Liverpool Chief of Police, John Lane. In part:

Chief Lane: We knew the photos would be shocking... We need help. We're strapped with resources as far as trying to handle this kind of thing. And I don't think the public is aware of the problem.... That's his grandmother, not his mother. And she has custody of him.... He needs to be removed from the environment he's in. He needs to be put in a safe loving environment.

Q: Is this about shaming?

Chief Lane: I don't think it's about shaming. It's to make people aware.... He was sentenced to 360 days. That's part of the issue here, too. You've got an obvious, a person who has an addiction. If you could have some sort of treatment there while he's in jail, so when he comes out he's not going right back to this. Some way to work and try to get off of this addiction.

Q: Is treatment in available if he wanted that?

Chief Lane: Not here. We don't have any resources. Even if somebody comes down to the station and knocks on the door and asks for help. Where do we send 'em? We have nothing here, in our county.... We need resources, is basically what it boils down to. We have an understaffed police department, we're constantly chasing one overdose after another. He had half a dozen over the weekend. One person passed away.

Q: What have you heard from the state or your local congressman? People who can take action here.

Chief Lane:I've heard nothing. In our little community here we don't have the resources here to deal with it.

And in searching for the picture, lots of similar cases popped up:

December, 2015, Pittsburgh, "A woman who had overdosed on heroin in Pittsburgh’s Morningside neighborhood Thursday afternoon was revived, after her 8-year-old daughter ran to get help."

July, 2016, Burlington, Vermont. "Police were called to the downtown parking lot of Pearl Street Beverage and Lakeside Pharmacy for the report of two people in a semi-conscious state in a car with a [five-year-old] child in the back seat 'screaming for help.'"

There's still the basic and false belief among too many people that somehow, somewhere, there are "programs" to help people. Or that the criminal justice system is a system with so single goal in mind. Like police arrest you, you do time, and you come out better for it. It's not true. And it never has been true. Sure, sometimes there's a program here or a grant-funded thing there, but basically, no. There's nothing. It doesn't matter what the problem is -- crime, drugs, mental illness, poverty (or all of the above) -- when somebody calls 911, police will show up. But then what? A lot of people need help. But it's not the kind of help police officers can give. Especially when police departments themselves need help.

[See my next post, on crime in East Liverpool, Ohio.]

Are you saying there's not enough drug rehab programs in the U.S. available?

With the caveat that I'm skeptical of a lot of drug rehab programs (who has figured out a cure for heroin addiction?), indeed, many places have none at all.

There is one sure fire cure for heroin addiction.

The kid is in a car seat.

They also didn't leave the kid at home, unattended. So what? Nothing much.
Just that it looks more like failure than depravity.