What a difference a year makes...

There's an article in Criminology & Public Policy by Justin Nix, Bradley Campbell, Edward Byers, and Geoffrey Alpert that has gotten some press: "A Bird's Eye View of Civilians Killed by Police in 2015: Further Evidence of Implicit Bias"

I replicated their data and got 93 "unarmed" suspects killed in 2015. (Replicating data should be a given, but often it is not. So kudos to the authors for this.) In 2015, 38 unarmed black men and 32 unarmed whites were shot and killed by police. If the distribution were proportional to all those shot and killed, one would expect 24 blacks and 46 whites killed. This is a statistically significant difference. From this, the authors conclude "Black civilians were more than twice as likely as White civilians to have been unarmed." Twice sounds big. The absolute number? Not so big. Still, if you're one of the 38 unarmed black men killed, it matters. 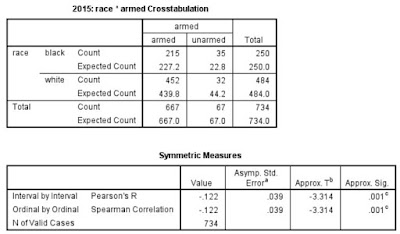 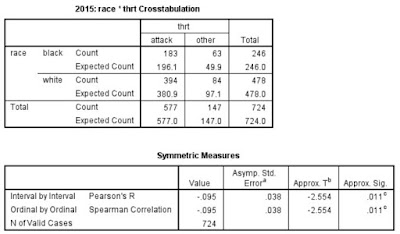 You can see that for the threat = "other" (Ie: non-attack, in theory), one would "expect" to find 49.9 blacks in that square (if race wasn't a factor). But in reality 63 blacks were killed. That's a big and statistically significant difference.

[I'm limiting the presentation of my analysis (as is my wont) to percentages, crosstabs, and univariate correlations. If one can't describe statistics to a lay-person, it all becomes too abstract. And a problem with doing advanced statistics is then most people don't understand what they mean (and that includes most academics). And so then the reader has to take the scribe at their word.]

[Also, I have serious non-trivial issues with categorizing "other" as "non-attack," but I'll leave that aside, until my next post. Also, for replication purposes, I too exclude "undetermined" threat level (n = 42), but I don't think one should. More on that in the next post.]

Here's where things get interesting! Unlike the authors, I can publish this in seconds and, for better and for worse, not wait for peer review (though corrections and comments are always welcome).

So with the click of a button on SPSS (a statistics program), I can include 2016 data and even 2017 data right up to February 8 (when I downloaded the data).

Here's what I get when I do their analysis on threat, but for 2016: 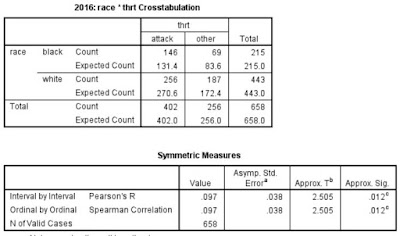 Compared to 2015, in 2016 the results are reversed. This is a big deal. There are fewer blacks in the "other" threat level than one would expect. And the results are equally statistically significant.

A similar things happens when one looks at armed and unarmed (again, I think this is too simplistic of a division, but that's what they use). 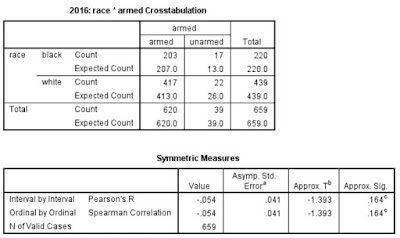 While the data isn't completely reversed, the differences in 2016 are minor enough (and the "n," the number of cases, small enough) that the racial disparity is no longer statistically significant.

What gives? Did the problem of racial disparity in police-involved killings disappear last year? Did it even reverse? I don't know. But replicating the 2015 study with 2016 data would lead to a very different conclusion.

Here are some other interesting tidbits.

• From 2015 to 2016, total shootings deaths by police went down from 990 to 963. Given the increase in homicide, I would have expected the number of police-involves shootings to go up (they are usually correlated). I suspect that the number went down because A) given the focus on the issue of police-involved shootings, cops are less likely to pull the trigger and B) the number of discretionary interactions between cops and criminals has decreased.

• Seventy-eight percent of 2015 killings (This if from Nix et al.I haven't recoded the 2016 data) happened in the South and West (with 60 percent of the population). Again, if one wishes fewer people to be killed by police, best to focus where police kill a lot of people.

• We really need more data, not just on police involved killings, but on all police-involved shootings. A lot of people are shot and not killed. We know next to nothing about this. And we need to know the context of these shootings. How did they start? How many are initiated by a call for service rather than a police officer's discretion?

It's not crazy to see some connection between these two variables: less proactive policing could [ie: does] mean fewer police-involved shootings and also more criminal shootings. Is this the best we can do? Is this the trade-off we want? Can one or should one talk about the value the lives in this way? I don't know. But since more people are dying (though fewer at the hands of police) these are things we need to be talking about.

[* The use of "or" is interesting. The numbers are really low. Cops just don't shoot many unarmed unarmed attackers. You can't really do multivariate analysis on a few dozen cases. Given the number of people killed by police, you can't look at racial discrepancies (statistically) when the person killed is not-attacking cops and unarmed.]

[comments are (only) available on the next, related, post.]

Email ThisBlogThis!Share to TwitterShare to FacebookShare to Pinterest
Labels: for academics, police-involved shooting, race
Newer Post Older Post Home
Peter Moskos is a professor and chair of the Department of Law, Police Science, and Criminal Justice Administration at John Jay College of Criminal Justice. He is the director of John Jay's NYPD Executive Master's Program, on the faculty of the City University of New York's Doctoral Programs in Sociology, and a Senior Fellow of the Yale Urban Ethnography Project.