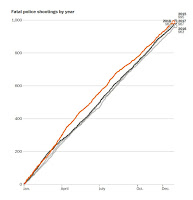 The other thing that continues to jump out (I've written about this before) is the state-by-state variation.

Or take Utah (because of this story in the paper). Utah has a murder and violence rate below the national average, a low poverty rate, and is 90 percent white. And yet people in Utah are almost 5 times as likely an in New York to be killed by a cop. Utah has murder rate lower than NYC, 1/5 the poverty rate, far fewer cops, and Utah is 90% white. In 2018, the rate of people shot and killed by police in Utah is multiple times higher than NYC.

The ten leading states -- as in cops most shootingest states -- in rank order, are New Mexico, Alaska, Oklahoma, Arizona, Colorado, Nevada, Wyoming, West Virginia, Montana, and Idaho. It certainly seems like if we were to focus on the states that have the highest rates of police-involved shootings (and by far), we could find some low-hanging fruit to reduce the number of said shootings. But to do this we'd have stop thinking of police-involved shootings as primarily related to race.

Collectively the top-10 states are 4.9 percent African American (compared to 13 percent nationally). These are the cowboy states out west. The 10 states with the highest percentage of black population (collectively 25%) have a rate of police-involved homicide (0.24) that is below the national average.

Funny you should mention Utah. All of your top ten states except WV and OK are in the top 12 on percent Mormon. And of the eight most Mormon states, all but Hawaii and Utah are in your top ten.

How does the police culture of a particular agency fit in? Do you consider this part of training? When I hear training, I think of attending courses, listening to lectures, reading manuals and watching videos, and such. Culture seems much broader and encompasses the attitude and values of the agency. I'm skeptical that formal training makes a big difference, but can see that different agency cultures could make a huge difference.

I would have to agree with Liberaltarian. The culture and shared experiences of a particular department would need to be analyzed. An individual can attend as much formal training as they want but it is the department atmosphere and officer experiences that will best determine if the individual will be more likely to utilize a less than lethal option in a situation or choose a lethal option.

It's interesting to look at these statistics. Too frequently we see on the television fictitious shows located in New York have such high crime rates and dramatic deaths of t.v. cops. It has ultimately created a false reality. Granted, as you mentioned, there are other factors playing into this such as training and number of cops per capita. Regardless, without seeing the numbers for myself I never would have believed it.

It is possible most white police are more hesitant to shoot black suspects: they are afraid of appearing racist; even if most of the suspects are black.