FOP Report: "Mismanagement of the BPD and its Impact on Public Safety"

I've read this so you don't have to. But you should. This is put out by Baltimore City FOP #3. So sure, take it with a grain of salt. But FOP #3 isn't like some other unions that tweet ill-advised statements that hurt the image of policing and their members. [cough NYPD's PBA SBA!]

In 2012 FOP #3 released "Blueprint for Improving Policing." It was far more right than wrong. It was ignored. Had it been followed, perhaps the 2015 riots wouldn't have happened. Then Baltimore would still be seeing declining crime and an influx of people.

In 2015 FOP #3 released an "After Action Review" of the riots that, again, was basically correct. As the Baltimore Sun put it: "If what the FOP reported is wrong, the Mayor and Commissioner need to prove it." Needless to say, they didn't.

So in the context that this is not an ideological screeds but a union perspective put together by a consulting team (that's OK, even encouraged) consider some of the points in the FOP #3 report about the Mismanagement of the Baltimore City Police Department.

This is not a crime plan. (But it least it doesn't pretend to be.) The consent decree isn't a crime plan nor are reformers' proposals to reduce police violence crime plans. We need a crime plan. But this is about fixing the organization. The first step.

There is still a leadership problem: Officers fear proactive policing because of unjustified criminal prosecution by the state’s attorney. This isn't just "we don't want to be held accountable" griping. See, eg, this.

As to the consent decree, “police have not been informed or training in following the consent decree.” But the major issue right now is probably staffing, and that results in overtime which costs money and, when mandatory, low morale.

Hire people to fill vacancies instead of paying overtime. As to recruitment: train recruiters in how to recruit, conduct exit interviews, recognize exemplary employees, and pay past due recruitment bonus. Seems like common decency, much less common sense.

There is currently budgeted funding for 470 more police officer positions, plus 100 civilians. Standards should be higher. And pay and benefits at a level to attract good candidates.

There are currently only 634 officers assigned to patrol. That is just 70 officers for each of 9 districts! (And may include sergeants, light duty, medical, etc.) This is probably less than half of what it used to be. I read this and said, "can it be?" It can.

Back in 2001, just one district (of nine total)--my district, the Eastern District--had 265 total assigned sworn police officers. We had 130(!) working patrol officers for 3 shifts. And I’m just talking officers (not sgt's and LTs or light duty or medical). Violence went down.

And when numbers are down, you can't take officers from HQ or consent decree compliance or specialized units or the mayor's detail or the academy. So you pillage patrol, the so-called "backbone" of any police department. And that is what has happened. BPD needs a backbone.
1 comment: Links to this post

Murder down for whites but not blacks

The 2018 murder rate is down from the previous two years, but higher than we’ve seen in 6 of the past 10 years. Last year's murder rate is the same as 2015. And 2009! And yet I keep hearing every year that violence is down. So what's this trend? And sort of related, why do some people insist on the “violence is down” message year after year, even when it's not true?

Violence plummeted in America between 1994 and 1999. It might be worth pointing out that is right after the Biden-supported and now maligned crime bill. I don’t actually think that’s why crime went down, but it does correlate. And it didn’t hurt. It might have helped.

Since 1999, the murder rate for whites has dropped even more, another 20%. Great news! But not for blacks. In absolute numbers, more blacks were murdered in 2018 than in 17 of the past 20 years. That's not a good trend. For African Americans, murder has been up and down over the past 20 years. But the murder rate is no better in 2018 than it was in 1999. 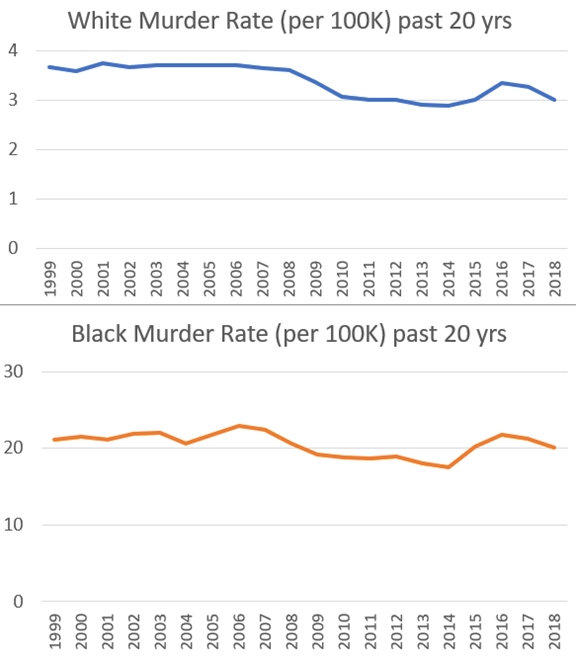 What bother me is some of my friends who insist “violence is down” are well intentioned white people who live in safe neighborhoods, hashtag #BLM, and believe those who advocate less policing in other people’s neighborhoods. (Neighborhoods they won’t set foot in, mind you.)
Yes, violence is down compared to 1991. But is it a sustained "trend"? Not really. Not if you start the clock in 2000. And not for non-whites. Not for young black men in particular. So when people say violent crime is down, ask "For whom?"

Brian Mulkeen was a Fordham grad and worked at Merrill Lynch till he quit his job and joined the NYPD. Apparently Mulkeen was killed by "friendly fire" while wrestling with an armed suspect.

There's a nice 1 minute video on twitter. I was mostly just sad and dry eyed till "Country Roads" kicked in. Because he's not just a cop; he's a person. RIP, Brian Mulkeen.

Email ThisBlogThis!Share to TwitterShare to FacebookShare to Pinterest
Labels: NYPD, officer down, police shootings
Newer Posts Older Posts Home
Subscribe to: Posts (Atom)
Peter Moskos is a professor and chair of the Department of Law, Police Science, and Criminal Justice Administration at John Jay College of Criminal Justice. He is the director of John Jay's NYPD Executive Master's Program, on the faculty of the City University of New York's Doctoral Programs in Sociology, and a Senior Fellow of the Yale Urban Ethnography Project.