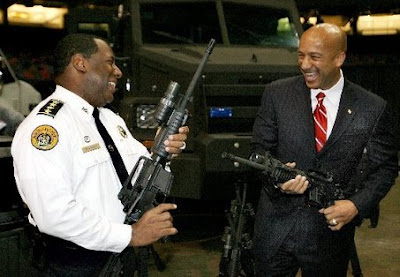 Mayor Ray Nagin and NOPD Superintendent Warren Riley try out a pair of the NOPD's new M-4 rifles Tuesday at the Superdome. Money from the state also provided 600 bullet-proof vests.

New Orleans Mayor Ray Nagin and Police Superintendent Warren Riley on Tuesday used the floor of the Superdome to display more than $1 million in new armament and other equipment, largely for use by the SWAT squad in emergency and riot situations, including a fully equipped mobile command post, two armored cars and modern assault rifles.

Nearly all of the equipment was financed from a $6.6 million state allocation to New Orleans police that was earmarked for crime-fighting items or strategies, Riley said.

The city officials said the new equipment reflected a determination by the Police Department to root out and arrest criminals and make New Orleans safer, as well as to help police handle any emergency situation encountered.

The money will also pay for 600 bullet-proof vests.

The 27- and 14-ton armored cars, costing about $380,000 and $270,000 respectively, will provide cover to officers in SWAT situations and help them safely evacuate citizens from dangerous situations, Riley said.

How this will reduce the murder rate, I'm not sure. Actually, I am sure. It won't.

This money should be spent on more police, on better police, on a pay raise, on foot patrol, and on giving language classes so police can communicate with the growing Spanish-speaking community. The bullet-proof vests are good. Half-a-million dollars on armored cars isn't

Automatic weapons and swat teams don't stop muggers. They do lead to innocent people getting killed and cops busting down the wrong doors in drug raids.

Congrats, Mr. Mayor and Mr. Superintendent! Have fun playing with your new toys. But Mr. Mayor, one bit of advice: you really shouldn't "laser" a police officer. Pointing a gun at a police officer will likely get you killed.

Email ThisBlogThis!Share to TwitterShare to FacebookShare to Pinterest
Labels: militarization of police, pictures

" SAY HELLO TO MY LITTLE FRIEND "