Since they say that writing about music is like dancing about architecture, I've got some audio tracks so you can hear the Baltimore Club sound and the work of K-Swift, who died a few days ago. 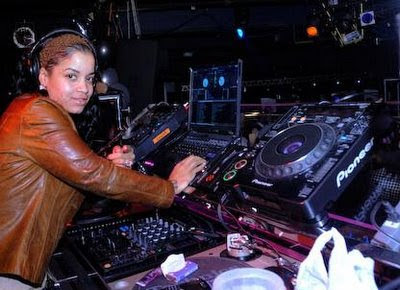 First and foremost, Baltimore Club Music is a beat.

If it ain’t got this beat, it’s not club music (the droning note is a classic sample from Public Enemy No. 1). After the beat is there, it’s up to the DJ. And often the DJ plays dirty, with lyrics not fit for kids (though I've selected relatively clean samples here).

But here’s what made K-Swift so damn good, so much better than the others. K-Swift was great at mixing what became known as mashing, taking, say a television theme song and putting it to a club beat.

That’s the theme from “I Married Joan” (not what most people think of when they think of Baltimore). I love that track. A great beat, sample from left field, and always a sense of humor.

This party spirit goes back to early days of hip-hop. I don’t know about you, but I like throwing my hands in the air and waving them like I just don’t care. It’s certainly more fun than glowering and nodding your head to brutal lyrics about a life you don’t agree with.

K-Swift was great with the samples, they’re not all as silly as this, but I like her silly. A track called Pork Chops and Onion Gravy coins the term “Bougo,” that means bougie and ghetto at the same time. And the beat, that’s club music!

Here’s a little sample that starts with Southpark and goes into horns. There’s a lot of horn in Baltimore Club music. I like horns.

Put it all together and you get this. Here is one of her complete short radio mixes I loved so much. It's not top quality, recording-wise. But it gives you an idea of the driving beat and spirit that really did make K-Swift the Club Queen.

A very informative post. However there is one major correction here that needs to be made. K-Swift was a great Baltimore Club DJ, NOT A PRODUCER. The tracks you feature were made by the likes of Dj Technics, Rod Lee, Scottie B, Diamond K, Booman, Dukeyman, KW Griff, Blaqstarr, Murder Mark, Say Wut, James Nasty, Matic, etc.

You're right, but when did I ever say she was a producer?

You did when you said she was a genius for it...she played it, she did not make it! -DJ Lucky

By the way...the track was made by KW Griff. Thanks again -DJ Lucky

(The track Joan...is the one I am speaking of) Just realized there are multiple tracks posted.....find all the producers yourself if you must know. -DJ Lucky (LOL)

And don't bother responding to me.....I'm sure I'll never see this again.