How medical marijuana is transforming the pot industry

Last night I read a great article in the New Yorker about the new sort-of-legal-at-the-state-and-local-level but still very-federally-illegal California medicinal-marijuana industry.

I'm very curious to see how this system evolves and is regulated. It just might work. And it may be a good model for other states. At the very least, it's starting to make California dependent on the tax dollars it brings in. 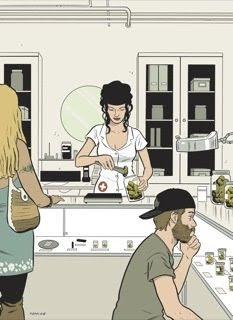 Emily had come to Humboldt ten years ago as a young activist, working to save old-growth redwoods. She first encountered marijuana plants after she picked some edible mushrooms on a friend’s land, cooked them up in marijuana-laced butter, and ate a good meal with some wine.
[...]
Emily decided to stay in the mountains. She loved the odd mixture of people who lived in a place with no apparent cash economy.... Gazing at the setting sun, Emily said, “I think a lot of those people were drawn up here for intuitive reasons—soul reasons, or whatever.” The problem with growing pot back then, she said, was that it was illegal, and that changed you. “You had to carry a gun and be scared of people, and you lost track of the reason you came up here.”
[...]
There were fewer stories in the newspapers about people being bound and gagged by cash-hungry gangsters.