My former firearms instructor sent me this link.

You face around 100 people, my guess is half are black, half are white, half are armed, half are unarmed. All in all, it takes less than 5 minutes (including loading time).

When it's over it gives you a score and also the response time for armed and unarmed white and black men. Here's mine: 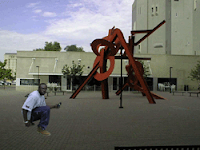 I think my overall score is pretty good. But the racial difference in response time is interesting. Of course I don't think I'm more likely to shoot black men. Besides, like any good cop, I'm not looking at race. I'm looking at their hands.

This kind of racial bias in consistent with most academic research that finds differences in response time towards white and black armed and unarmed suspects.

Feel free to cut and paste your scores in a comment.

Thanks for the link Peter, that was great. After I got the hang of it, I guess I was ok, just a little slow. Some of the stances and the way the guys held the cell phones kind of threw me. I got docked for slow reaction a number of times. On the up side, I didn't blast any innocents. Overall, it was very educational. I hope this excercise becomes well known to the public. It might help people to see use of force issues in a more nuanced way.

I've been sort of passively following tests like these for years. In general I've thought they were bullshit, done by liberal academics (...of which I am one, but unlike me...) They have no friggin' idea about police work or even statistical realities of race and crime.

This test, however, I kind of liked. I thought it was fair. As a cop I found it not exactly realistic, but still, based on training I had as a cop:look at hands, look for a threat. It seemed fair. And as an academic I found my result interesting.

Race-wise on response time, Dave, you were opposite of me. You're not by any chance black?

I'm still not convinced that such small time difference really do matter (3/100th of a second?). But maybe they do.

About unarmed people in an armed stance... as a cop, all too often I saw some idiot reach into his waistband just to test me.

If you shoot him, you lose. Of course he loses more. But that's no consolation to me if I go on trial for shooting an innocent kid. Reaching into your waistband like you have a gun isn't a crime. And a police officer's testimony to that fact won't convince the city jury.

Nope, not black. I'm actually German-Irish (or White, per the government). I don't know how to explain the difference in reaction time, and like you, I'm not sure it matters much. I will say that I've dealt with my fair share of ignorant/violent caucasians, so I certainly don't buy into theories that link criminality to ethnicity.

I can identify with your comment about the idiots who like to "test" folks in uniform. I regularly encounter people on the job who "play fight" or do other things to get a reaction from me. I've also heard of situations where intelligent citizens set off firecrackers and pretend to be shot when the P.D. is in the area. Quite a warped sense of fun, eh. Unfortunately, this kind of activity seems to be most prevalent in poor, black neighborhoods, at least here in Central IL.

I agree with you that this wasn't the most realistic shoot/don't shoot simulator. I may be a police recruit in the near future (By the way, this is a hard freakin' field to get into sometimes. Have you done any research on impediments to police recruitment???)so I look forward to testing myself with a more advanced version. Thanks again. Yours is one of the best C.J. blogs out there by a long shot.

The FATS training was pretty cool when I took it. But it's expensive and labor intensive. The guy who sent me this link was manning the FATS machine when I took it. Maybe I can get him to chime in.

FATS is good because it responds to what you do. It's not just shoot no shoot. You can give verbal commands that matter and actually take a little cover. The operator punches something in to the machine to take your actions into account.

And it records where you shoot. My only complaint is that the gun didn't have a realistic sound or recoil. But mostly I was upset because I didn't get to do it enough! It's both fun and great training.

Very cool. Looking forward to it if I ever get there. I would say this should be a part of an officers annual core training. That way, training staff could assess not just proficiency, but also look for indications that the job might be making officers to quick to shoot. Conversely, trainers could also see if an officer's reaction time is slowing to the point where it could impact their safety or the safety of the public.

I don't think anybody has ever done a study linking FATS training to on-the-job shootings. That would be something to know.