You will not do that shit on my porch!

I just chased two junkies off my stoop! This is, as they say, not that kind of neighborhood. Plus this block has something like four active and former cops living on it.

I'm sitting here writing about drug legalization in my basement office, and I hear two guys outside the window. One goes on my stoop. I go upstairs to investigate. I see the cap comes off a water bottle and I see a needle about to come out of a sleeve.

Mother fucker! The SOBs are about to shoot up! I haven't dealt with junkies at my door since I lived in Baltimore (when I stepped on a load of crap one of them left and somewhat routinely had to deal with junkies shooting up and drunks pissing in my alley).

I open the front door to get the element of surprise. I know the heavy screen door is locked and secure, but they don't know that.

"You will not do that shit on my porch!" They're kind of apologetic, but not really. They make some faggy comment, perhaps because I'm standing there in my underwear (hey, it's hot!).

Dumb ass New York native white guys, for what it's worth.

Gets the adrenaline flowing, that does. Something as simple as that.


This was "my" alley in Baltimore: 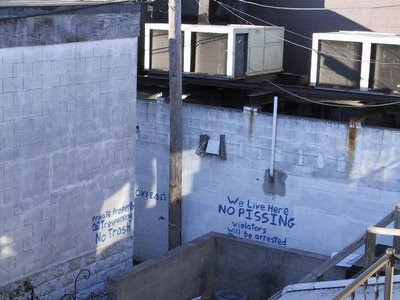 It was fun to write "violators will be arrested" when I actually had the power to carry through on that threat personally!

I wasn't the only person who lived there. But I was the only person that had to take a small alley off of an even smaller alley to enter his house. I lived on the second floor and my only entrance was off the rear porch... to an alley, that connected to another alley.

No, I couldn't subscribe to a newspaper or get mail service. Pizza delivery was out of the question.

But it was a nice apartment and rent was only $300/month. I also had the world's best landlady, Miss Mary. She lived downstairs (with the front door). I'd make her spankopita and she'd leave regular shipments of paximathia and koulourakia (delicious Greek cookies).

Way to put your foot down. Junkies may indeed have a problem, but they don't have to inflict themselves upon others. Your property, your call. I get tired of the sense of entitlement that many substance abusers exhibit. Like it's my fault you got hooked. And hey, you gave them a break. Many people who don't see through the drug war nonsense would have called the police. You just urged them to fire up in a nice, dark alley or something. Well done.

"Faggy"? Is that really necessary? You've got an interesting blog, and I plan on buying your book, but can we lose the homophobic undertones?

I'll say it wasn't necessary! Next time I see them, I'll ask them not to call me a “faggot.”

When you walk away, swish your hips, squeeze and lift your ass cheek while saying something I couldn't quite hear but involved the word “faggot,” well, that's what I call a "faggy comment."

Cut me some slack as a writer! Who wants to read the politically correct interpretation?: “The gentlemen retrieved their belongings and walked away in manner stereotypically associated with effeminate male homosexuals. A few steps away, they said something obscene under their breath that raised the possibility that I am inclined to homosexual behavior.”

Trust me, I’m not homophobic. And my book is both more interesting and honest for my disinclination to be politically correct.

Well Mr. Moskos, it appears you have drawn the ire of the PC Police. You see, the PC Police don't feel the need to ask questions or investigate why someone is speaking or acting the way they do. They simply fly into a tizzy and start shouting phrases like, "homophobe," "racist," "sexist" or "fascist." They particularly enjoy shouting down ideas that aren't 100% in line with their own. You often find the PC Police congregating at coffe houses or teach-ins located near college campuses. You might also find them at demonstrations denouncing the "police state," even as they try to control the thoughts and speech of their fellow citizens. Now that you got your stern warning from PC Constable Stephen Smith, hopefully you'll be more careful in the future, Mr. Moskos. Move along, nothing to see here, lad.

But in Mr. Smith's defense, the comment as written is ambiguous. And I don't approve of using homosexual terms as general insults.

Besides, for these junkies, it would be an unjustified elevation in social status to be fags. As my brother put it, "Who do they think they are using fag as an insult? They're junkies! That's the bottom of the social totem pole." As I quote in my book, "Who gives a flying fuck about a junkie!?"

I'm actually more surprised that no one has objected to me using the word "junkie."

At the clinic you may be an substance abusing drug addict, but shooting up on *my* stoop?... you're a goddamn junkie!

I must admit that I went into a fit of snarkiness there, and I was just trying to give Stephen a good -natured ribbing. Truthfully, I kind of wondered about the "faggy" part myself, but being familiar with your writing, I figured there was just more to the story. I have had similar experiences with substance abusers and other people who have no room to denigrate others using this kind of rhetoric to be provocative (usually towards productive citizens who are trying to help them). In fact, that's the first thing they come up with generally. If you try to calm them down or tell them something you don't want to hear, your a fag (or if you're a female, you're a "bitch" or some other nice descriptive term)

Homeschooling can is difficult with a baby or daughter is young. You have to provide time in the day for each child. Look for age appropriate activities for both ages. Use every moment to have both of your children engaged while allowing them personal time for bonding or development.
www.fpish.org |