Australia police confiscated 15 million pills of ecstasy. That's a lot of dancing! The ecstasy was hidden in cans from Italy, supposedly of canned tomatoes.

What's amazing about hauls of these huge sizes is just how little they matter.

Why, what if all that ecstasy had gotten through?! I mean just think, every shipment before this did get through... and nobody was the worse for it. Ecstasy isn't really dangerous. If it were pure MDMA (the active ingredient) 15 million pills could have been swallowed and nobody would have died (unless, of course one person swallowed all 15 million).

But still, 15 million pills is a lot, almost enough one for every man, woman, and child in Australia.

You want to know how hard it is to stop drugs from coming in? Look at this picture from the BBC: 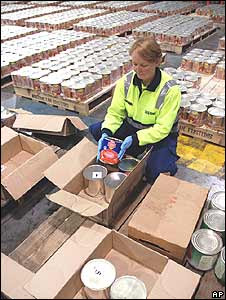 Each layer in the pallet has 72 cans. That means you need only 42 layers of cans. I'm no expert with the fork lift, but I'm thinking maybe you could stack these 8 high(?). So with just maybe five pallets, you could enough E to supply all of Australia for, well, I have no idea for how long Australia needs to go through 15,000,000 pills.

How hard can it be to move a couple of pallets into an economy? Not hard at all. That's why we'll never get rid of drugs Not as long as people want to get high.