The Daily News reports that a cop's gun "accidentally" fired. No it di'int! If there's one thing I learned as a cop, it's that guns don't fire by themselves. You gotta pull the trigger.

Now there is a chance, if your finger is on the trigger, that you could get hit by something and accidentally squeeze the trigger. But if you did, the bullet wouldn't hit the driver. No way. With the luck of police, if would probably hit your best friend. 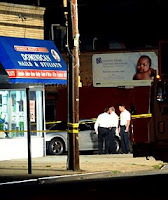 It was a good shooting. Here's the abridged version of what's in the Daily News:

One of the two passengers runs, is caught. The car jumps the curb and drives into a store gate. The driver spins the car about 270 degrees, striking the lieutenant. "As the car hit the cop, he accidentally fired his gun, sending a bullet through a rear window and striking the driver."

So why would the cop say the gun accidentally fired when he took a good shot that needed to be taken in a tough situation? Because it's against the rules to fire at or from a moving vehicle (I've always liked that "from" part).

Now it makes sense that you generally don't want to kill the man in control of a car. But sometimes you need to. And this one one of the cases. But the rules don't allow for that.

What's an officer to do? There are three choices (and you have 1/2 second to decide):

1) Do nothing, get hit by a car, and have the car zoom off before it crashes into someone or something?

2) Do the right thing, shoot, be honest, and potentially get in trouble for shooting at the driver of a moving car?

Or 3) do the right thing, shoot, tell a little white lie, and be called a hero?

It'd do the latter. So did the lieutenant.

I wish departmental rules would allow cops to do their job, stay safe, tell the truth, and not get in trouble. But they don't. And since they don't, I say well done, L.T.!

Agreed. This was a "good" shooting. This was a deadly force situation (the guy did hit the Lt., after all) and the threat needed to be stopped. Totally legit under Furman v. Georgia. Case closed.

Throwing "accidently" in there shows: 1.) police are getting paranoid out there and 2.) They are trying to "pretty up" shootings when it's not neccessary.

But it is necessary because he broke departmental rules and could get in trouble for it.

Understood. Sometimes my idealism clouds my judgement and I miss relevant details like that. He could certainly wind up on the bad side of a departmental investigation. Also, I cited the wrong case above. I meant Garner v. TN, which limited the number of situations in which police could lawfully use deadly force.

I was hoping and kind of assuming you meant Tennessee v. Garner (police can't shoot felons just for running--this case was the end of "stop or I'll shoot").

Because if you did mean Furman v. Georgia, the logic of applying this death penalty case to a police shooting would be a little crazy!

Yup. I don't know why I confused these rather different cases. Apparently I'm getting a little rusty,having been out of college for a whole 7 1/2 years. Looks like I better dust off an old text book and brush up.